I got myself into a bit of a muddle with my reading this week. This is what happened…

Feeling bored, I had a look through the ebook catalogue on our Public Library’s app and chose a few to download, purely based on hunches. Amongst them was my first read of the week: Dana Stabenow’s No Fixed Line. 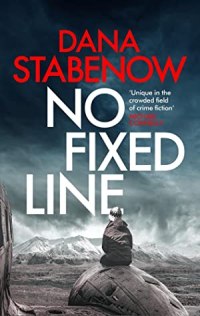 No Fixed Line by Dana Stabenow

…I didn’t notice that it is #22 in her Kate Shugak series! Yes, the twenty-second book!

Now, this is really basic stuff and I should know better – more about this later in the post. Anyway, here is the blurb:

… though there is no fixed line between wrong and right,
There are roughly zones whose laws must be obeyed.

It is New Year’s Eve, nearly six weeks into an off-and-on blizzard that has locked Alaska down, effectively cutting it off from the outside world.

But now there are reports of a plane down in the Quilak mountains. With the National Transportation Safety Board unable to reach the crash site, ex-Trooper Jim Chopin is pulled out of retirement to try to identify the aircraft, collect the corpses, and determine why no flight has been reported missing. But Jim discovers survivors: two children who don’t speak a word of English.

Meanwhile, PI Kate Shugak receives an unexpected and unwelcome accusation from beyond the grave, a charge that could change the face of the Park forever.

This is my rather muddled response to the book, as posted on Goodreads:

No Fixed Line by Dana Stabenow
My rating: 3 of 5 stars

It was rather stupid of me to choose a book which is 22nd in a series, without having read any of the others. So it was my own fault that I felt quite lost at times with the plot, characters and settings. There seemed to be so many people, relationships and situations to get to know!

What I did enjoy was the wonderful descriptions of Alaska which has led this semi-rural English woman to find out more about the state’s geography and history. I also had to do some basic research about the Aleuts. Many of the characters were also interesting, especially Kate herself and her dog Mutt.

As for the plot: much of this was also a little confusing, but it kept my interest to the point that I have downloaded a lot more of the books so that I can start properly with the first one!

A Cold Day for Murder by Dana Stabenow

OK, so that was the first part of this post – now to the second part. I then turned to the first book in the series: A Cold Day for Murder. First we have the blurb:

Somewhere in the hinterlands of Alaska, among the millions of sprawling acres that comprise “The Park,” a young National Park Ranger has gone missing. When the detective sent after him also vanishes, the Anchorage DA’s department must turn to their reluctant former investigator, Kate Shugak. Shugak knows The Park because she’s of The Park, an Aleut who left her home village of Niniltna to pursue education, a career, and justice in an unjust world. Kate’s search for the missing men will take her from self-imposed exile back to a life she’d left behind, and face-to-face with people and problems she’d hoped never to confront again.

I think I was even more confused by my response to this book:

A Cold Day For Murder by Dana Stabenow
My rating: 3 of 5 stars

I found this book rather strange in some ways. The main character, Kate Shugak, has a lot more of a back story than usual, for a first book. In fact her past sometimes seems to be more interesting then the events she is involved with in the present! I wonder if the author will eventually let us know more?

The descriptions of Alaska were amazing and the hard life of the people living there was well-drawn. As a complete outsider, I did find some of this quite difficult to follow, but I intend to read more of the books to see where the author will lead us. I could have done with a list of characters as I became rather confused as I read on. There is such a sense of melancholy in the book that left me with a feeling of sadness when I finally finished the book.

So, I have now finished two books in a very long series and have not rated them higher than three stars. I have to admit that in a very mad or weak moment I actually bought ebooks 1-9! Why did I do that? I’m not at all sure. Anyway, I will take a break from Alaska and choose something quite different for my next book.