Scarf of the moment: Zebra Pegasus

Zebra Pegasus, designed by Alice Shirley for Hermès, has been so popular since it was first issued in 2014 that it has appeared in every format imaginable. Well, just about. I have it in the gavroche size, issued for the Autumn/Winter 2015 season, but it has been offered as a 90cm twill, a maxi-twilly, a cashmere-silk shawl and a mousseline (chiffon).

When it appeared as a 90cm, my usual favourite size, I felt that the design was too bold for me and I did not think that any of the colourways would suit me. The gavroche issue, however, was a different thing altogether. I found the colourway I loved (09) on a reseller site at a reduced price and snapped it up. I adore how this little scrap of silk feels around my neck and the colours are perfect for my wardrobe: teal background, navy and white zebra pattern and shades of blue and purple on the feathered wings. Yes, the scarf shows a zebra as Pegasus – great fun!

I wear this scarf quite often as it goes with so many of my clothes and accessories, particularly my cobalt cable jumper, anything in navy or purple and this teal twin-set. The collage below shows modelling photos from the last couple of years:

As you can see, I also have several accessories which tone with the scarf – earrings from Blue Nile, bracelets from Ferragamo and Halcyon Days:

Accessories which go well with my Zebra Pegasus gavroche

These were the colourways available for the gavroche in 2015: 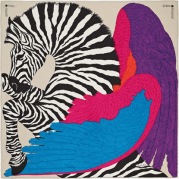 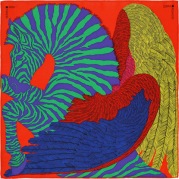 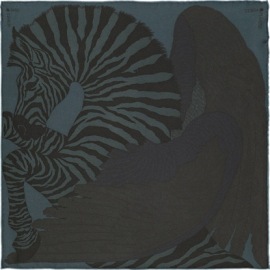 As the design has appeared in so many formats, I must show some of the other colourways which have been available over the years since 2014: 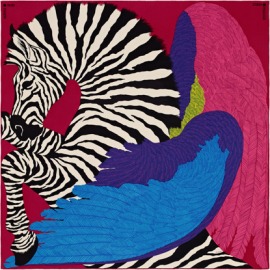 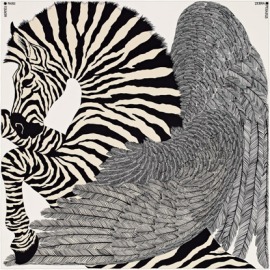 A graduate of the Central Saint Martins College of Art and The Prince’s Drawing School in London, Alice Shirley is a frequent collaborator with the city’s Natural History Museum. Fascinated by the myth of Pegasus, and the famously untameable African zebra, Alice Shirley reinvents the classical legend, transporting it to southern Africa. The celestial mount of Zeus brought forth the fountain of the Muses with a kick of his hoof, and was turned into a constellation by the king of the gods. Here, he swaps his immaculate white coat for the two-tone pattern of his close equine cousins. Completing this highly original portrait, his magnificent wings turn flaming orange, echoing the plumage of African parrots. Has his metamorphosis given Pegasus the power of speech, like them? We cannot know…

The theme of Pegasus appeals to my love of Ancient Greece again – this time Greek mythology. If you are interested in the legend, I hope you find these links useful:

The legend of Pegasus was often shown in ancient art from the Greeks, the Etruscans and the Romans. Here are some depictions on ceramics and mosaics: 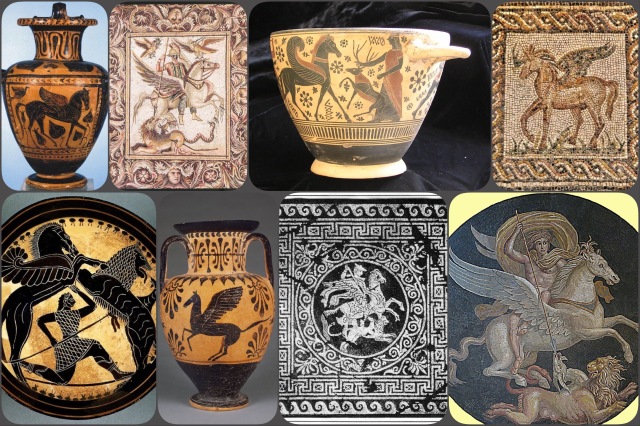 In fact Pegasus, as well as being a favourite of ancient art, also seems to be very popular in Paris. There are several statues that can be seen:

Pegasus on the Pont Alexandre, Paris by Max London on Flickr 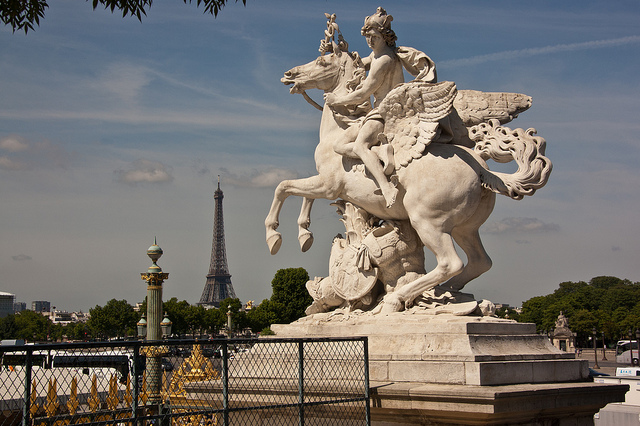 Pegasus on the Pont Alexandre, Paris by Max London on Flickr

2 Responses to Scarf of the moment: Zebra Pegasus