I think Daimyo Princes du Soleil Levant, designed by Françoise Façonnet in 1990, was my first purchase of a vintage Hermès scarf. I saw it on the Videdressing site (link in the sidebar) and took a risk, hoping that it would not be a fake. The gorgeous green background colour caught my eye, then the gold and silver with touches of navy blue and pink. The photo on the site showed it as a turquoise shade, but in actual fact it is a true green. Most photos do not do it justice.

I have been unable to find a Hermès’ scarf story for Daimyo, but have looked into the background. The Daimyo were military lords in Japan from the tenth to the nineteenth centuries. They held land, built castles and controlled armies of Samurai. The scarf shows Samurai swords with emblems for the different Daimyo families. If you would like to find out more about the Daimyo, there are some links below for you to try:

And here is a video on YouTube from 1988 – Daimyo: The Arts of Feudal Japan

The scarf also comes in loads of colourways. I have shown a few below, but if you wish to see more, have a look here or do a simple image search on Google. 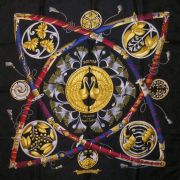 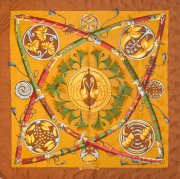 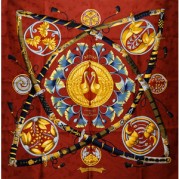 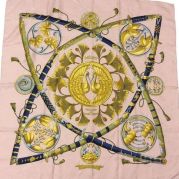 This is a winter scarf for me and I tend to wear it with navy tops in a variety of knots. The collage below shows some of these.

If you are interested in this scarf, it often appears on eBay and on the sites of resellers.