Despite feeling under the weather all week, I have managed to finish two books. So, I am feeling quite pleased with myself. The only issue is that I am struggling to write coherent reviews. If I write up my response quickly, very soon after I have completed a book, I am usually able to remember enough to write about. But if I leave the review for a few days, then I sometimes find that I have almost forgotten the whole thing! Anyway, I have tried my best with these two.

No Way Out by Cara Hunter

My first book was the third book in Cara Hunter’s DI Adam Fawley series: No Way Out. Here is the blurb:

It’s one of the most disturbing cases DI Fawley has ever worked.

The Christmas holidays, and two children have just been pulled from the wreckage of their burning home in North Oxford. The toddler is dead, and his brother is soon fighting for his life.

Why were they left in the house alone? Where is their mother, and why is their father not answering his phone?

Because this fire wasn’t an accident.

I apologise in advance for this bare-bones review!

No Way Out by Cara Hunter
My rating: 4 of 5 stars

This was another excellent book by Cara Hunter and I am rapidly becoming a huge fan of this gripping series. With her books, I find that I am unable to work out the plot in advance – which is a good thing when it comes to murder mysteries! Just when I believe I have got a handle on things, another twist comes along and upturns all of my previous ideas!

I like how the main characters’ lives are being developed through the series, with some surprises for them along the way. It will be interesting to see how they all work out as the series moves on.

All in all, I can highly recommend this book and I look forward to reading the next one! 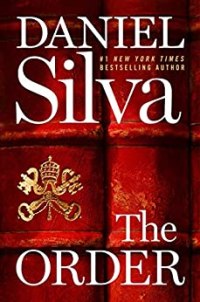 The Order by Daniel Silva

My second completed book of the week was The Order by Daniel Silva, Gabriel Allon #20. This is part of the (extremely long and detailed blurb):

Gabriel Allon has slipped quietly into Venice for a much-needed holiday with his wife and two young children. But when Pope Paul VII dies suddenly, Gabriel is summoned to Rome by the Holy Father’s loyal private secretary, Archbishop Luigi Donati. A billion Catholic faithful have been told that the pope died of a heart attack. Donati, however, has two good reasons to suspect his master was murdered. The Swiss Guard who was standing watch outside the papal apartments the night of the pope’s death is missing. So, too, is the letter the Holy Father was writing during the final hours of his life. A letter that was addressed to Gabriel.

While researching in the Vatican Secret Archives, I came upon a most remarkable book …

The book is a long-suppressed gospel that calls into question the accuracy of the New Testament’s depiction of one of the most portentous events in human history. For that reason alone, the Order of St. Helena will stop at nothing to keep it out of Gabriel’s hands. A shadowy Catholic society with ties to the European far right, the Order is plotting to seize control of the papacy. And it is only the beginning.

As the cardinals gather in Rome for the start of the conclave, Gabriel sets out on a desperate search for proof of the Order’s conspiracy, and for a long-lost gospel with the power to put an end to two thousand years of murderous hatred. His quest will take him from the Ponte Vecchio in Florence, to a monastery in Assisi, to the hidden depths of the Secret Archives, and finally to the Sistine Chapel, where he will witness an event no outsider has ever before seen—the sacred passing of the Keys of St. Peter to a newly elected pope.

In fact, I actually cut some of that! And here is my Goodreads’ review:

The Order by Daniel Silva
My rating: 3 of 5 stars

I have read religious thrillers of this type before and this is not among my usual genres. This book was part of our library services ebook offer and I just chose it at random.

So, I enjoyed a lot of the book, although I realised quickly that I had obviously come very late to a very long series. I don’t know if that fact has had a big impact on my response to the book, or not. Many of the characters were interesting and intriguing, despite obvious huge back stories. The actual plot was also engaging. The huge drawback for me was the sheer length of the book and the long list of characters. I found it really difficult to keep them all in mind as I read.

I am unlikely to read more books in the series as I don’t think I am prepared to purchase them, but if I were, I would start at the beginning. There is a clear fan base here on Goodreads, so that gives me the idea that the series could be worth my attention.

Traces: The Memoir of a Forensic Scientist and Criminal Investigator by Patricia Wiltshir

I have to disclose that there was another book that I attempted to read this week. It is Traces: The Memoir of a Forensic Scientist and Criminal Investigator by Patricia Wiltshire. Unfortunately, I was unable to finish the book, for a variety of reasons, and I don’t feel able to write a fair review. If you are interested, then do have a look at other people’s responses on Goodreads, or other reviewing websites.

Right, so now I will go and make another pot of tea and then return to my latest book. What is it? Well, you will find out in next week’s Reading Roundup post!

Until then, Happy Reading to you all!