I adore the gorgeous colours and the complex pattern of L’Arbre du Vent. This scarf was designed by Montserrat Gonzalez-Lugo for Hermès’ Autumn/Winter 2015 season.

The design is versatile and ties beautifully because all four corners are very different, showcasing a range of patterns and colours. This means that it can look as if you are wearing another scarf each time, depending on how you tie it. The hues of this colourway are very rich and deep: purple, fuchsia, green, teal, burgundy and shades of blue. The hand-rolled hem is in a gorgeous shade of purple.

If you read the design story below, you will see that the scarf is based on embroidery and threaded wool. On closer examination, these elements appear almost three dimensionally on the scarf – such clever design! It is attention to tiny details like these that makes Hermès scarves so special and, in my opinion, stand above the rest. Not that I have any great experience as yet, so I don’t mean to sound pompous!

The images in the first collage are from the Hermès website, showing the scarf itself and then a model wearing it. Oh, to be as slim as I was in my twenties! I would definitely have worn scarves as a top like this. 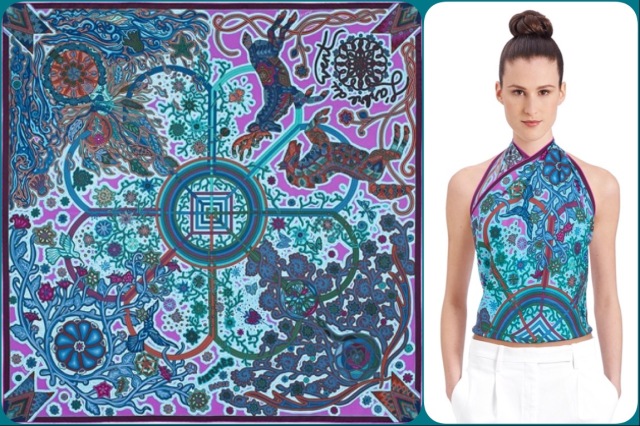 These alternative colourways are all lovely. I chose colourway 12: 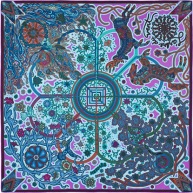 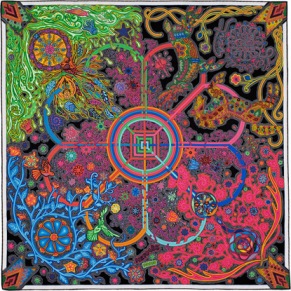 The scarf story is intriguing:

L’Arbre du vent is a tribute to the Huichol people of Mexico’s western Sierra Madre – also known as the Wixáritari – and their polytheistic religion, worshipping the divinity inherent in every aspect of the natural world. At its centre, the scarf depicts the eye of god, the protector, surrounded by the four elements, marking the four corners of the Huichol world: Mother Water, the origin of life, Tatei Haramara; Earth, the soul of the world, Tatei Yurianaka, with two hummingbirds fluttering above, symbolising the souls of traditional shamans; Grandfather Fire, Tatehuari, and Air, Kieiri, the Wind Tree. Mexican artist Montserrat Gonzalez-Lugo has taken inspiration from traditional bead embroideries and threaded wool pictures to depict the essence of Huichol spirituality.

I have worn this scarf a lot, so below is a collage showing some of the scarf ties that I have used. It looks lovely worn with winter outfits in shades of navy, teal, turquoise, purple and blue. Actually, now I think about this, the scarf would also look good in a necklace tie worn with a navy or purple t-shirt with linen trousers or jeans – so it could work in warmer weather too. 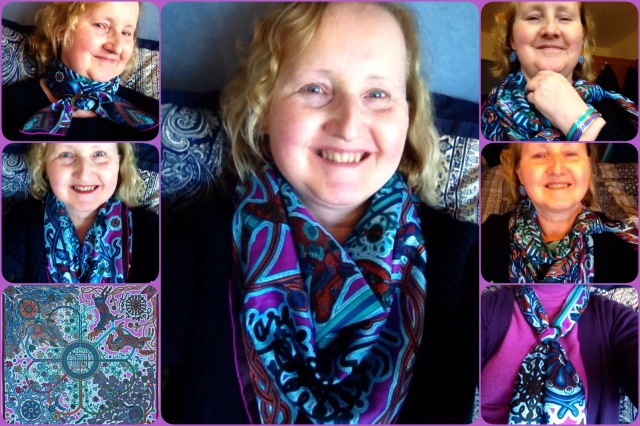 By the way, during the Autumn/Winter 2015 season, I couldn’t decide which scarf would suit me best. This won the vote I held on The Purse Forum – thanks, fellow TPFers!

3 Responses to Scarf of the moment: L’Arbre du Vent