Yesterday’s trip made me feel very happy and so pleased that we had done something special for once. But it did take a lot out of both of us. I am so tired today, although I did manage to get out of bed for a short while and watch some recorded TV. So, as I wore my “slob gear” – leggings, thick socks, layered vests and a jumper – I don’t think that readers of this blog would particularly like to see a collage of those! So my “Outfit of the day” is done in one paragraph.

Instead, I will tell you about two recent purchases. Ooh, spending money again. I just love parcels appearing at the door, it feels like a birthday! The first purchase was a week or so ago as a consolation for feeling so very ill. As readers will probably be aware, as well as scarves, I have a love affair with bracelets and bangles, particularly the enamel kind made by Halcyon Days. Well, a few weeks ago, I was made aware that Liberty of London have started offering similar ones, this time with my favourite Ianthe and Hera patterns! OMG!!!! How could I resist? I had a look and couldn’t decide which one(s) to put in my wish list – they are all so gorgeous. When I went back to look at the site, the white Ianthe bangle had gone (I hope they get this back in stock), so I ordered this one…. 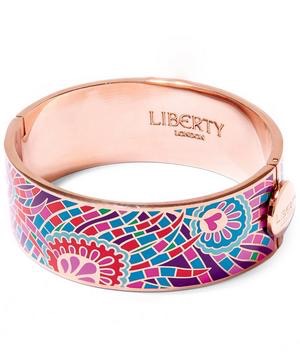 Isn’t it wonderful? It looks even nicer in reality. Yes, it is very expensive, but the family kitty loaned me the cash as, apparently, I am worth it! It will look great with loads of my outfits in the spring and summer as the colours are purple, lilac, pink, red, green, turquoise and blue with rose gold. It is in the pretty Hera pattern of feathers. As it is very close to the sizes of the Halcyon Days bangles, it can be worn alongside them in a stack. Such bling!

My second purchase only arrived this morning and was bought to commemorate our thirty years together. This is one of the Hermès scarves which I think may become a “grail” in the future. There has been such a lot of interest in it online, with all the different colourways being discussed over and over. I will show the images from the Maison des Carrés website here, but save a detailed post about this scarf until next Friday, when I will have had time to wear it and take some photos. It is too gloomy today to take any.

The scarf is called Parures de Samouraïs and was designed for Hermès Spring/Summer 2017 collection, meaning that it is available online now. Mind you, Hermès are notorious for their unpredictability, so the scarf will most likely appear and disappear in numerous colourways over the next few weeks and months. I won’t write any more about it now as that would spoil my “Scarf of the moment” post about it next week. Here are the images… 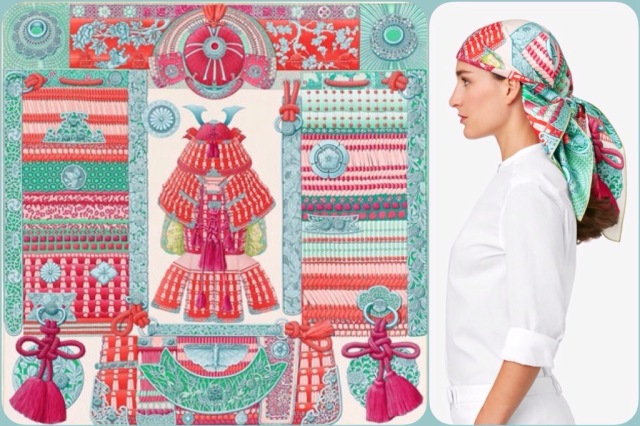