I think that books are going a long way towards saving my life at the moment. My situation would be almost unbearable if I could not lose myself in a good story. That is why I read: story. And probably why I don’t read high literature. My lack of concentration means that I need to be gripped and carried away by a stream, a river, a wave of images and events. 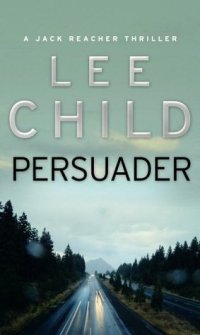 So, my first book this week was Lee Child’s Persuader, Jack Reacher #7:

As I started reading this book, I began to realise that I had read it before but had not entered it on Goodreads. So I must have read it some years ago. Even though I remembered bits of the story, it somehow didn’t matter really. I enjoyed the book and how the two stories, one memories of the past, mirrored each other. Now that I have almost finished the series, it is clear how formulaic the books are, but I don’t mind that. You mostly know what to expect with a Jack Reacher and if you are in the right mood that’s OK!

I gave the the book four stars. When I remember, I will check to see which books in the series I have not yet read and will reserve them at the public library. That’s another way Goodreads is helpful as it lists each authors’ work in full and I can then quickly check on the library catalogue. All done whilst sitting up in bed working on my iPad!

As I had still not been well enough to visit the library, I then found another ebook to read: Lincoln Child’s Full Wolf Moon, #5 in his Jeremy Logan series, and a kind of supernatural thriller. Sadly, this was not such a satisfying read and I was probably generous in giving it three stars. I couldn’t think of much to say about it either!

I read this in an afternoon. Quite enjoyed it, but it was nothing special and was very predictable.

We don’t have a subscription to Sky Atlantic in this household, so I have missed watching series such as Game of Thrones until they became available on DVD. So I had also not seen Outlander until it started on More4 recently. I read most of the series ages ago, but then saw that they had become available on our library’s ebook service. So my last book of this week was a re-read of Diana Gabbaldon’s Voyager, which is #3 in the series. I love this book for certain scenes, which fans of the series will know well. I also dislike it for other reasons: massive plot holes, the stereotyped and prejudiced rendition of some characters and the actions of other characters which simply don’t fit with their previous behaviour. I can’t be more open than this without spoilers!

Half the World by Joe Abercrombie

I was so pleased when Lovely Husband took me to the library last Friday and I was able to borrow my next pile of books. I am currently reading the book pictured above, Half the World by Joe Abercrombie, and so will write about it in next week’s Reading Roundup post.