Gosh! I have only managed to read two books this week (plus half of a third, but that doesn’t count). So I had better start this post and get back to my latest book 😄. 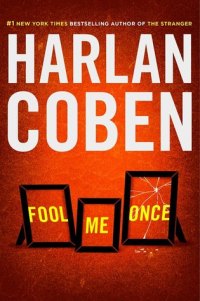 Fool Me Once by Harlan Coben

I had no print books left at the end of last week, until my library visit on Friday, so I turned to the ebook service and found Fool Me Once by Harlan Coben. Here is the blurb for this book:

Former special ops pilot Maya, home from the war, sees an unthinkable image captured by her nanny cam while she is at work: her two-year-old daughter playing with Maya’s husband, Joe—who had been brutally murdered two weeks earlier. The provocative question at the heart of the mystery: can you believe everything you see with your own eyes, even when you desperately want to? To find the answer, Maya must finally come to terms with deep secrets and deceit in her own past before she can face the unbelievable truth about her husband—and herself.

And this was my three star Goodreads’ review:

I enjoyed most of this book, but felt let down by the last quarter. I downloaded this as an ebook from our library service and read it quickly. The plot was fast-paced and exciting, with enough twists to keep it interesting, but I felt that the twist at the end was taking things just too far. In addition, none of the characters were at all engaging, apart from maybe the children, so I felt that I didn’t really care too much how it would all turn out.

I may read more by this author in the future because, according to Goodreads, this was not one of his better books!

When I had finished this book, I had a very fruitful visit to the local Library, picking up eight books, including three reservations. These are now nicely stacked on my bedside table.

Eagles in the Storm by Ben Kane

Arminius has been defeated, one of the three eagles has been recovered, and thousands of German tribesmen slain. Yet these successes aren’t nearly enough for senior centurion Lucius Tullus. Not until Arminius is dead, his old legion’s eagle liberated and the enemy tribes completely vanquished will he rest. But Arminius is still at large, devious, fearless and burning for revenge of his own. Charismatic as ever, he raises another large tribal army, which will harry the Romans the length and breadth of the land. Into this cauldron of bloodshed, danger and treachery, Tullus must go – alone. His mission – to find and bring back his legion’s eagle – will place him in more danger than he has ever faced before. Can he succeed? Can he even survive?

I awarded this book four stars on Goodreads:

A really excellent ending to this trilogy and I wish I could award it 4 1/2 stars! The author has obviously thoroughly researched the historical background as the whole thing feels so real and the descriptions of army life fit very well with those of other authors, such as Bernard Cornwell.

These three books are gritty and violent with a lot of emotional scenes (the deaths of characters we have come to care for), leavened with a deal of humour. The female characters are very few, as you would expect with the subject matter.

It is interesting how the author makes a British reader empathise with the Roman side, rather than the conquered tribespeople. I would be interested to see what he would make of the story of Boudicca!

I think I will read more by Ben Kane as I really enjoy his recreation of Roman life, even if he is not so good with the women’s stories! 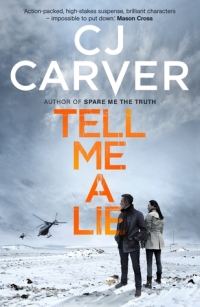 Tell Me a Lie by C J Carver

I am currently reading C J Carver’s Tell Me a Lie, the sequel to Spare Me the Truth, which I read last week. As I am already halfway through, and I only started it yesterday, you can tell that I am enjoying the book. More about it next week.

Best wishes and I hope you enjoy your own reading,

Retired School Librarian
View all posts by The Librain →
This entry was posted in Libraries, Reading and tagged book reviews, books, ebooks, Goodreads. Bookmark the permalink.