I did manage a quick visit to the Library this week, but still had a few ebooks left in my account too. When I choose ebooks, I tend to find something beyond my usual genres so I was very pleased with my rather wild selections!

The Bones of Paradise by Jonis Agee

My first choice was The Bones of Paradise by Jonis Agee. This is described as:

…a multi-generational family saga, set in the unforgiving Nebraska Sandhills in the years following the massacre at Wounded Knee—an ambitious tale of history, vengeance, race, guilt, betrayal, family, and belonging, filled with a vivid cast of characters shaped by violence, love, and a desperate loyalty to the land.

Here is the blurb:

Ten years after the 7th Calvary massacred more than 200 Lakota men, women, and children at Wounded Knee, J. B. Bennett, a white rancher, and Star, a young Native American woman, are murdered in a remote meadow on J. B.’s land. The deaths bring together the scattered members of the Bennett family: his cunning and hard father, Drum; his estranged wife, Dulcinea; and his young sons, Cullen and Hayward. As the mystery of these twin deaths unfolds, the history of the dysfunctional Bennett’s and their damning secrets are revealed exposing the conflicted heart of a nation caught between past and future.

At the center of The Bones of Paradise are two remarkable women. Dulcinea, returned after bitter years of self-exile, yearns for redemption and the courage to mend her broken family and reclaim the land that is rightfully hers. Rose, scarred by the terrible slaughters that have decimated and dislocated her people, struggles to accept the death of her sister, Star, and refuses to rest until she is avenged.

And here is my review:

This was an almost five star read. An extraordinary book, a mixture of genres and like nothing I have ever read before. Fantastic descriptions of the landscape, the period and the characters. Strong story arcs that keep the reader guessing until the end. Wonderful female characters. I really loved it so, oh let’s change that to a five! Recommended for this with the patience to savour this wonderful read.

I really don’t think that I would have chosen this from the library shelves, so I am so glad that I stumbled across it when wandering through the ebook catalogue! I must now look for The River Wife as that also sounds amazing.

The Quiet Child by John Burley

The next book was The Quiet Child by John Burley. This was very different from the previous book. This is the blurb:

It’s the summer of 1954, and the residents of Cottonwood, California, are dying. At the center of it all is six-year-old Danny McCray, a strange and silent child the townspeople regard with fear and superstition, and who appears to bring illness and ruin to those around him. Even his own mother is plagued by a disease that is slowly consuming her.

Sheriff Jim Kent, increasingly aware of the whispers and rumors surrounding the boy, has watched the people of his town suffer—and he worries someone might take drastic action to protect their loved ones. Then a stranger arrives, and Danny and his ten-year-old brother, Sean, go missing. In the search that follows, everyone is a suspect, and the consequences of finding the two brothers may be worse than not finding them at all.

I gave this one four stars on Goodreads and wrote this review:

I almost didn’t read this, but I am so glad that I did. I also read it in one afternoon. Such a creepy mystery set in 1950s small town America. I can’t say much about the plot as it would give too much away, but there were amazing twists and a great atmosphere to the book. Recommended.

The Lieutenant by Kate Grenville

The third book of the week was another departure from my “normal” called The Lieutenant by Kate Grenville. This one was set 18th century Australia:

As a boy, Daniel Rooke was always an outsider. Ridiculed in school and misunderstood by his parents, Daniel could only hope, against all the evidence, that he would one day find his place in life. When he joins the marines and travels to New South Wales as a lieutenant on the First Fleet, Daniel finally sees his chance for a new beginning. As his countrymen struggle to control their cargo of convicts and communicate with those who already inhabit the land, Daniel constructs an observatory to chart the stars and begin the scientific work he prays will make him famous. But the place where they have landed will prove far more revelatory than the night sky. Out on his isolated point, Daniel comes to intimately know the local Aborigines and forges a remarkable connection with one young girl, Tagaran, that will forever change the course of his life. As the strained coexistence between the Englishmen and the native tribes collapses into violence, Daniel is forced to decide between dedication to his work, allegiance to his country, and his protective devotion to Tagaran and her people. Inspired by the notebooks of British astronomer William Dawes, The Lieutenant is a remarkable story about the poignancy and emotional power of a friendship that defies linguistic and cultural barriers, and shows one ordinary man that he is capable of exceptional courage.

This also deserved the full five stars (oh, I have been so fortunate with my choices 😍):

What a wonderful book. I have never read anything like this before, an account of the early colonisation of Australia. A young man, sensitive, intelligent and shy, is part of that colony and learns part of the native language from a young aboriginal girl. Their relationship is very innocent and touching. The background about mathematics and astronomy is amazing. I wonder if the main character has autistic traits with his struggle to understand social cues and his fascination for the subjects in my previous sentence. This is a magical book, so well written.

I will definitely look out for other books by Kate Grenville if they are also of this high quality. 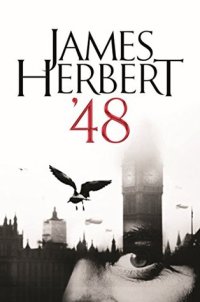 The last book of the week, and my final ebook for now as I have a lovely big pile of print books to read, was a much easier and less satisfying read, worth three stars: 48 by James Herbert. Here is the blurb:

In 1945, Hitler unleashed the Blood Death on Britain as his final act of vengeance.

Those who died at once were the lucky ones. The really unfortunate took years. The survivors – people like me, who had the blood group that kept us safe from the disease – were now targets for those who believed our blood could save them.

I survived for three years. I lived alone, spending my days avoiding the fascist Blackshirts who wanted my blood for their dying leader. Then I met the others – and life got complicated all over again . . .

And here is my response:

One of those books where you ignore the clichés and plot holes and just go along for the ride. Rather stereotypical characters, particularly the women. Exciting and gripping throughout with just the right amount of bloodthirsty(!) horror.

I now have a pile of six library books next to my bed and I am going to enjoy working my way through them. Two are books I reserved in response to reading Leviathan Wakes by James S A Corey last week. I will let you know what I think when I have finished them.

Here’s hoping you all enjoy your reading!