No romance books for me leading up to Valentine’s Day! Instead, I have been reading science fiction again and a kind of mix of both that and fantasy. One of my two books was very good and enjoyable, the other was far less successful.

I am continuing to read the books in The Expanse series whilst being sad that I missed the TV version when it was broadcast a few years ago. We don’t have Netflix so that I can catch up with it now. Mind you, maybe the changes that they always make would annoy me, as an admirer of the books. Anyway, this time it was the turn of #03 Abaddon’s Gate by James S A Corey and here is the blurb:

For generations, the solar system — Mars, the Moon, the Asteroid Belt — was humanity’s great frontier. Until now. The alien artifact working through its program under the clouds of Venus has appeared in Uranus’s orbit, where it has built a massive gate that leads to a starless dark.

Jim Holden and the crew of the Rocinante are part of a vast flotilla of scientific and military ships going out to examine the artifact. But behind the scenes, a complex plot is unfolding, with the destruction of Holden at its core. As the emissaries of the human race try to find whether the gate is an opportunity or a threat, the greatest danger is the one they brought with them.

These books are pretty long and and it takes me quite a while to finish each one as they also demand a good level of concentration. When I say a while, I mean three of four days, rather than one or two. This was my review on Goodreads for four stars:

Another great book in a great series. An interesting exploration of how humans, in the face of something too awful (in its original meaning) to fully comprehend, are often consumed by fear. They then react to that fear in a number of different ways. This book brings together differing religions, revenge, hubris, courage and the worst and best of human behaviour. A fantastic ride through space! 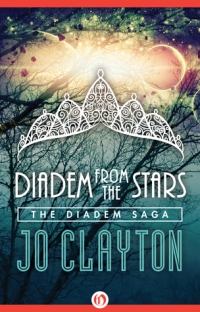 Diadem from the Stars by Jo Clayton

I did have the next book, #04 Cibola Burn, waiting in the pile, but decided to change direction a little and read an ebook which was waiting for me on my iPad: Diadem from the Stars by Jo Clayton. This is #01 of a very long series, The Diadem Saga. This is the blurb:

Raised, but never loved, by the barbarian valley people of Jaydugar, a planet of two suns, young Aleytys has always known she did not belong. Abandoned by her space-traveling mother and barely tolerated by a superstitious primitive tribe fearful of divine reprisals, Aleytys is forced to flee for her life following the catastrophic appearance of a fireball in the sky. Guided by her absent mother’s journals, the young outcast must now journey alone across an unfamiliar world of perils in search of an escape from this planet that holds no hope for her future.

But her pursuit of a spacecraft and the parent who inexplicably left her behind leads young Aleytys instead to the miraculous device that will determine her destiny. An object of unimaginable power—a magical technology stolen from a vengeful alien arachnid race determined to recover it at any cost—the Diadem instantly becomes an integral part of who and what Aleytys is and will be. Once its great energy is transferred to her she will never be free of it, and mastering the Diadem’s wonders is Aleytys’s only hope for survival now that she has become the most wanted woman in a dangerous universe.

I gave the book three stars and wrote this short review:

This book is more like fantasy with a bit of science fiction thrown in. It was interesting and kept my attention, but had very odd “jumps” between events. I think it was originally published in the 70s and that does show to some extent, particularly in the sexual relationships, with some strange moments. I will try the second book in the series as the first four are available as ebooks from the public library, but I am not sure how this will pan out in the long run.

After that diversion, I have returned to the world of The Expanse and am currently a third of the way through James S A Corey’s Cibola Burn. I will let you know my thoughts next week. To give you a hint, I am about to request #05 from the Library just as soon as I finish this post!

Hoping you are all enjoying your reading.