This week I have read three books all from the same series: Nichole Christoff’s Jamie Sinclair. I had run out of both print books and ebooks and so ended up purchasing these three. I had already enjoyed two other books in the series so I was looking forward to these.

The Kill Shot by Nichole Christoff

The first was the second book in the series, called The Kill Shot. Here is the blurb:

Jamie Sinclair’s father has never asked her for a favor in her life. The former two-star general turned senator is more in the habit of giving his only child orders. So when he requests Jamie’s expertise as a security specialist, she can’t refuse—even though it means slamming the brakes on her burgeoning relationship with military police officer Adam Barrett. Just like that, Jamie hops aboard a flight to London with a U.S. State Department courier carrying a diplomatic pouch in an iron grip.

Jamie doesn’t have to wait long to put her unique skills to good use. When she and the courier are jumped by goons outside the Heathrow terminal, Jamie fights them off—but the incident puts her on high alert. Someone’s willing to kill for the contents of the bag. Then a would-be assassin opens fire in crowded Covent Garden, and Jamie is stunned to spot a familiar face: Adam Barrett, who saves her life with a single shot and calmly slips away. Jamie’s head—and her heart—tell her that something is very wrong. But she’s come way too far to turn back now.

Let me start by saying that this was a great read and a gripping thriller. I simply didn’t enjoy it as much as the first book in the series. In this one, Jamie allows herself to be so distracted by the men in her life that her supposed skills as a security expert seem to be almost non-existent! The fact that the reader can see her blatant mistakes and she cannot gets very annoying. Also, as a non-puritanical reader, I wish she would just get on with it and bed her man. The way that the author puts so many obstacles in the way, including numerous broken limbs, is irritating to say the least. If Jack Reacher can kick ass and have sex in each book, then Jamie Sinclair can too!

Um, OK. Also, as this book was largely set in England, there were a few mistakes that irritated, although nothing very important to the plot. Don’t get me wrong, this series is highly entertaining. Maybe I am getting too picky as I get older!

The Kill Box by Nichole Christoff

My next read was #03 in the series, The Kill Box, and was much better, deserving a solid four stars:

…PI Jamie Sinclair tackles a cold case that could cost her the one person who means the most to her.

Hardworking Jamie Sinclair can’t wait for the weekend. She plans to be off the clock and on the road to wine country with handsome military police officer Adam Barrett. But when a strung-out soldier takes an innocent woman hostage and forces his way into Jamie’s bedroom, everything changes. Jamie’s never seen the soldier before. But he’s no stranger to Barrett—and with one word he persuades Barrett to pack a duffel and leave Jamie in the lurch.

Jamie cannot fathom why Barrett would abandon her without explanation. But as the consequences of an unsolved crime threaten to catch up with him, a late-night phone call sends Jamie racing to Barrett’s hometown in upstate New York. In a tinderbox of shattered trust and long-buried secrets, Jamie must fight to uncover the truth about what really occurred one terrible night twenty years ago. And the secrets she discovers deep in Barrett’s past not only threaten their future together—they just might get her killed.

This was my review:

This was a much better book than #02 in the series in just about every way: better plot, better characters and much better writing. Christoff had dropped many of clichés that were so annoying previously: the glasses and Barrett’s boxers body. Well, she does mention them, but not nearly as often. She also likes to have a second love interest for our heroine, which is also getting rather repetitive. This book, however, was much more enjoyable and so gripping that I read it in one go. Now to my next read in the series! 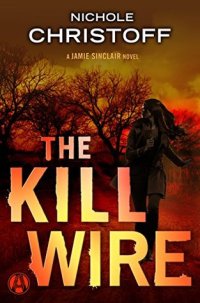 The Kill Wire by Nichole Christoff

This book was a definite improvement and so I turned to my final read of the week, #05, called The Kill Wire. What happened to #04, The Kill Sign? Well, some of you may remember that I read that book some time ago. In fact, I have just realised that it was almost exactly a year to the day and I gave it four stars. Anyway, this is the blurb for The Kill Wire:

With a long list of high-profile, high-paying clients, Jamie Sinclair has her hands full—and that’s the way she likes it. Still reeling from the brutal investigation that drove a wedge between her and her boyfriend, military police officer Adam Barrett, Jamie is counting on hard work to help her forget her recent history—but then DEA agent Marc Sandoval barges back into her life. The last time they worked together, Jamie almost crossed all kinds of lines. Now Marc doesn’t just want Jamie, he needs her . . . because she’s the only one who can help him—and the little boy he never told her about.

Marc’s ex has vanished, leaving their six-year-old son in his care. Despite a troubled past, Elena never wavered in her duties as a parent, so something must be very wrong now. Teaming with Marc to track Elena through her home state of Colorado and beyond, Jamie finds herself on a cross-country search for the missing mother of Marc’s child, at a crossroads with Adam, and on a collision course with the killers who’ll stop at nothing to find Elena first.

Perhaps I was getting upset because I couldn’t go to the Library and get more print books, or perhaps I shouldn’t read so many books in one series at one go. Well, whatever was irritating me caused me to write this, erm, “honest” review:

I am beginning to wish that I hadn’t stuck with this series. Whilst the main plot in each book is a pretty good and exciting thriller, the longer term arc of Jamie’s relationships with her men is getting increasingly annoying. Do I assume that she gets to have incredibly hot sex in book six to make up for all this coitus interruptus in every book so far? If not….. well….

Right, well there we go! There is one more book in the offing, as far as I know, and I will read that if only to find out whether it has a “satisfactory” ending! Due to be published in June 2018, it will be called The Kill Chain, according to Goodreads.

Thank goodness I have been able to get to the Library at last. I have one more ebook reservation to read and then I will dive blissfully into my fresh book pile 📚📚📚📚📚…

Happy reading to you all.