I have to admit that my avid viewing of Battlestar Galactica on Amazon Prime really got in the way of reading this week. I was so addicted that I simply had to binge watch it until the very last episode and it was so worth it. Such a fabulous series!

So, only one book was finished this week, although I am halfway through the next one. My only book was Maestra by L S Hilton. Here is the blurb:

Judith Rashleigh works as an assistant in a prestigious London auction house, but her dreams of breaking into the art world have been gradually dulled by the blunt forces of snobbery and corruption. To make ends meet she moonlights as a hostess in one of the West End’s less salubrious bars – although her work there pales against her activities on nights off.

When Judith stumbles across a conspiracy at her auction house, she is fired before she can expose the fraud. In desperation, she accepts an offer from one of the bar’s clients to accompany him to the French Riviera. But when an ill-advised attempt to slip him sedatives has momentous consequences, Judith finds herself fleeing for her life.

Now alone and in danger, all Judith has to rely on is her consummate ability to fake it amongst the rich and famous – and the inside track on the hugely lucrative art fraud that triggered her dismissal.

Set in the exotic palaces and yachts of Europe’s seriously wealthy. With a heroine as wickedly perceptive as Amy Dunne and as dangerous as Lisbeth Salander, this marks the beginning of a sequence of novels that will have readers around the world on the edge of their seats and holding their breath.

Um, well it might be part one of a series but I certainly will not be reading the rest! I awarded this book only one star on Goodreads and wrote this review:

This has a really confusing plot, a main character who changes into a complete psycho with no obvious motivation, little real tension for a thriller and far too much hype. Not recommended at all.

Yes, of course it was compared with Fifty Shades of Grey and yes I have read that utterly dreadful book too. To be honest, this was simply unpleasant. Thank goodness that there are plenty more books in the library! Or the bookshop… 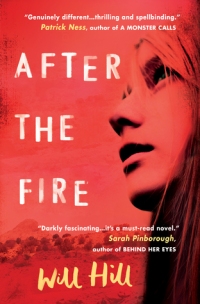 After the Fire by Will Hill

I am now almost halfway into a great Young Adult novel (yes, I am managing YA! Yay!) by Will Hill called After the Fire. It is really good so far and I will give you my verdict next week. I need to stock up my book pile again and will try to get to the Library later in the week.

Happy Reading to all of my bookworm friends.