Scarf of the moment: Bibliotheque

As a Librarian, I absolutely had to snare Bibliothéque for my Hermès scarf collection! The design is a classic by Hugo Grygkar and has been issued several times since its debut in 1996. My researches have shown that the scarf also appeared in 2010. The design has also been used over the years for wallpaper and textiles, resulting in beautiful clothing and cushions, for example. My own version was re-issued as a silk twill gavroche for the Hermès Spring/Summer collection in 2017.

Bibliothéque by Hugo Grygkar for Hermès

I didn’t immediately purchase the scarf in 2017 as I was not sure if any of the colourways would suit me. They didn’t appear to fit with the colourwheel I use for my clothing and accessory choices. So, I missed the boat. Some time later, I saw the simple blue and white version (shown below) on eBay, but didn’t win the auction. Then, earlier this year, two different colourways became available on eBay and I realised that this bright little scarf (colourway #22) would actually work well for me.

The design depicts a set of bookshelves with rows of old-fashioned looking books in a range of colours. Some of the books stand neatly upright, others lean against their neighbours. There is a ribbon bookmark which curls elegantly downwards. Some of the books have titles which relate to a range of activities – equestrianism, hunting, coaching – for which the house of Hermès is noted. The name Bibliothéque and also Hermès Paris appear as titles on two of the books. Most of the book spines have detailed decorations in shades of grey and white, which appear almost silver from a distance. Some of the books have coloured ornamentation.

Colourway #22 is (according to Hermès) rose indien, vert, blue. The border of my scarf is a bright fuchsia pink and the “shelves” are shades of orange. The books themselves are coloured cobalt blue, mustard yellow, green and the same pink. The spines are carefully shaded so that they have a proper rounded appearance.

I have noticed that some of the older versions of the design have more ornamented bookshelves. The shelves on the newer issues are more simply depicted. 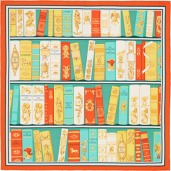 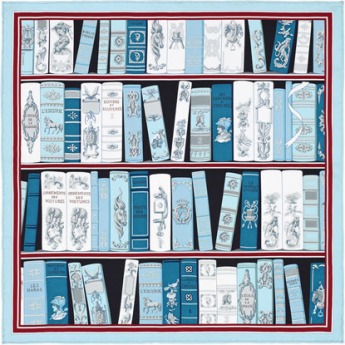 This design has also been used for Hermès clothing and other items, including wallpaper – now I would really love to have that in my home: 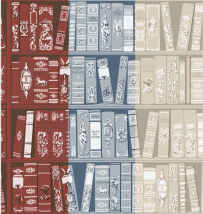 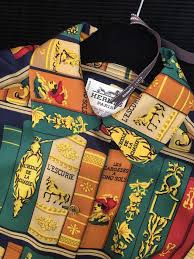 A dress or a blouse in this design would be heavenly for me!

There does not appear to be a design story for this scarf.

Here are some closeups of my scarf in a sideshow format:

How I wear the scarf

When I purchased this scarf, I knew that it would look great with my Lands’ End cobalt blue cotton cable jumper and twinset. These two collages show just how nicely these combinations work. I am so pleased!

I will also wear the scarf with white, or navy blue, but I don’t think it would work with pink. Cobalt is the best.

Outfit of the day 24/05/18 with Hermès’ Bibliothéque gavroche

The gavroche was tied in the collage above using my little “device” – I wrote a post about this a few weeks ago – see the link below.

Outfit of the day 12/04/18 with Hermès’ Bibliothéque gavroche

As you can see, I have a few pretty accessories which look lovely with these outfits. But this scarf really needs lipstick!

Here are a few scarf knots which work well with this cute gavroche:

Here is a reminder about the little contraption or device that I made from some brass D-rings and Bolduc to help lengthen gavroches: Wardrobe planning #27: Wearing pocket squares.

I have only been able to find a couple of links about this scarf design. The first is a lovely post showing possible scarf ties using a 1996 version of Bibliothéque:

Happyface313
How I Wear My… Pocket Scarf

I hope readers have found this exploration of Bibliothéque both interesting and useful. Once again, if you find any errors or have any additional information that I could add, please don’t hesitate to contact me.

Retired School Librarian
View all posts by The Librain →
This entry was posted in Scarf of the moment, Scarves, Wardrobe and tagged Bibliothéque, gavroches, Hermès, Hugo Grygkar, pocket squares. Bookmark the permalink.

3 Responses to Scarf of the moment: Bibliotheque