I have finished only one book this week! Quite shocking for me, I suppose. But, it had over 1000 pages, and when I tell you that it was Diana Gabaldon’s An Echo in the Bone (#07 in her Outlander series), fans will know the reason why. 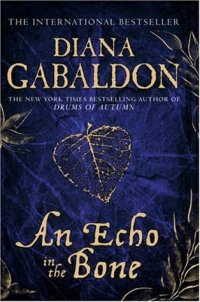 An Echo in the Bone by Diana Gabaldon

I had requested volumes 7 and 8 from the local library and had put them both aside for a while until I felt able to tackle such long books. Well, I felt able enough this week!

Anyway, here is the blurb:

Jamie Fraser, erstwhile Jacobite and reluctant rebel, knows three things about the American rebellion: the Americans will win, unlikely as that seems in 1778; being on the winning side is no guarantee of survival; and he’d rather die than face his illegitimate son — a young lieutenant in the British Army — across the barrel of a gun. Fraser’s time-travelling wife, Claire, also knows a couple of things: that the Americans will win, but that the ultimate price of victory is a mystery. What she does believe is that the price won’t include Jamie’s life or happiness — not if she has anything to say.

Claire’s grown daughter Brianna, and her husband, Roger, watch the unfolding of Brianna’s parents’ history — a past that may be sneaking up behind their own family.

Here is my review on Goodreads. I awarded the book four stars:

I know that there are all kinds of things wrong or annoying about these later Outlander books: the length, the detail, the detours from the plot telling the reader about the minutiae of life in the 18th century, the differing points of view, the plot holes, the stupid and incomprehensible decisions made by some of the characters, the huge number of characters, characters dropping in that the reader has forgotten about, the overwriting, the overwhelming number of story arcs carrying on simultaneously, or not quite, the number of maritime disasters, the sheer length of the books (oops, I have said that already)…

You know, I love this series. I love finding out how Claire is going to perform a miracle of medicine. I love the sheer adventure. I love the tiny details of their lives. I love the romance. I even love the characters I hate!

I love these huge bricks of books…

So, I am finishing this review now and turning to the next one: Written in My Own Heart’s Blood. And it will be just as daft as the last one…

And I don’t care!

So, there you go. I am going to do exactly that…

Written in My Own Heart’s Blood by Diana Gabaldon