I enjoyed two very different books this week, one historical, the other science fiction. It is wonderful to have libraries which give us access, free at the point of use, to a wealth of choice for our reading. 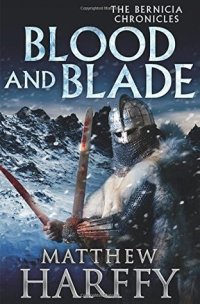 Blood and Blade by Matthew Harffy

The first book was Blood and Blade by Matthew Harffy (#03 Bernicia Chronicles), set in 7th century Britain. Here is the blurb:

Oswald is now King of Northumbria. However, his plans for further alliances and conquests are quickly thrown into disarray when his wedding to a princess of Wessex is interrupted by news of a Pictish uprising.

Rushing north, Oswald leaves Beobrand to escort the young queen to her new home. Their path is fraught with danger and uncertainty, Beobrand must try to unravel secrets and lies if they are to survive.

Meanwhile, old enemies are closing in, seeking brutal revenge. Beobrand will give his blood and blade in service to his king, but will that be enough to avert disaster and save his kith and kin from the evil forces that surround them?

It, perhaps, wasn’t a very good idea to jump into a series at the third book, but it wasn’t too difficult to understand some of the previous storylines. If you decide to read this series for yourself, I would recommend that you begin at the beginning, unlike me! Anyway, here is my short review. I gave the book three stars as I did enjoy reading it, but had quite a lot of reservations.

I love historical fiction, particularly Roman Britain and also the Dark Ages, so I immediately picked this up when I visited the Library. As a huge fan of Cornwell’s Last Kingdom series, I must admit that this book was a real disappointment. The characters were such stereotypes, especially the female ones. The whole thing is such a macho testosterone fest with no leavening of humour at all. I enjoy books with gory battles, but this was simply not written well enough. 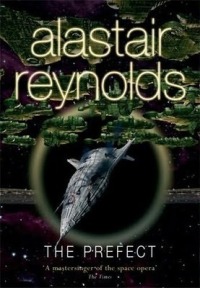 The Prefect by Alastair Reynolds

The second book of the week was a much more satisfying read: The Prefect by Alastair Reynolds (Prefect Dreyfus Emergency #01). Some of you may remember that I wrote about the second book in this series, Elysium Fire, a few weeks ago. This is the blurb:

Tom Dreyfus is a Prefect, a policeman of sorts, and one of the best. His force is Panoply, and his beat is the multi-faceted utopian society of the Glitter Band, that vast swirl of space habitats orbiting the planet Yellowstone. These days, his job is his life.

A murderous attack against a Glitter Band habitat is nasty, but it looks to be an open-and-shut case – until Dreyfus starts looking under some stones that some very powerful people would really rather stayed unturned. What he uncovers is far more serious than mere gruesome murder…

I must admit that I find the use of the term “Glitter Band” amusing – I was still at school when they were in the charts! Anyway, here is my four star review of the book on Goodreads:

I read the two books in this short series (yes, I know it is part of a much larger set of science fiction tales) the wrong way round. So, I did already know who would survive until the second book! I suppose that did have quite an effect on my appreciation of the story. However, I really loved both of the books. The world-building is totally amazing and I have already requested the first book of the main series so that I can immerse myself in what looks like an incredible achievement in science fiction writing. These books are not easy, simple reads, but they are well worth a little extra concentration in order to appreciate the exciting and intricate plot, the amazing scenarios and technology and the sheer imagination of the author. Brilliant stuff! 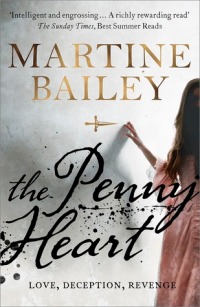 The Penny Heart by Martine Bailey

Phew! I still have a large book pile in my bedroom and also a few more requests to pick up from the Library. My next book, which I will write about next week, is set in the 18th century this time: Martine Bailey’s The Penny Heart.