As I missed writing last week’s roundup post, I decided to split the fortnight’s reading into two separate posts, yesterday’s and today’s. Here are a few more books…

Zima Blue and Other Stories by Alastair Reynolds

Zima Blue and Other Stories by Alastair Reynolds was a fascinating short story collection. Here is the blurb:

Reynolds’ pursuit of truth is not limited to wide-angle star smashing – not that stars don’t get pulverised when one character is gifted (or cursed) with an awful weapon by the legendary Merlin. Reynolds’ protagonists find themselves in situations of betrayal, whether by a loved one’s accidental death, as in Signal to Noise, or by a trusted wartime authority, in Spirey and the Queen. His fertile imagination can resurrect Elton John on Mars in Understanding Space and Time or make prophets of the human condition out of pool-cleaning robots in the title story.

But overall, the stories in Zima Blue represent a more optimistic take on humanity’s future, a view that says there may be wars, there may be catastrophes and cosmic errors, but something human will still survive.

I found some of the stories a little hard to read, as I have very little scientific knowledge, but the extra effort was worth it. I gave the book four stars and wrote the following review on Goodreads:

A really entertaining selection of short stories by a fantastic author of science fiction. As I am not a scientist, unlike the author, some parts of the stories were a little difficult for me, but I didn’t find that a problem as the overall plot of each one was so interesting and intriguing. These stories really made me think. I now need to find more books by Reynolds in our library catalogue or I may be forced to actually buy them!

The Alphabet House by Jussi Adler-Olsen

My second book was The Alphabet House by Jussi Adler-Olsen. I had already read one book by him, a crime novel, but this one was entirely different. This is the blurb:

British pilots James Teasdale and Bryan Young have been chosen to conduct a special photo-reconnaissance mission near Dresden, Germany. Intelligence believes the Nazis are building new factories that could turn the tide of the war. When their plane is shot down, James and Bryan know they will be executed if captured. With an enemy patrol in pursuit, they manage to jump aboard a train reserved for senior SS soldiers wounded on the eastern front.

In a moment of desperation, they throw two patients off the train and take their places, hoping they can escape later. But their act is too convincing and they end up in the Alphabet House, a mental hospital located far behind enemy lines, where German doctors subject their patients to daily rounds of shock treatments and experimental drugs. The pilots’ only hope of survival is to fake insanity until the war ends, but their friendship and courage are put to the ultimate test when James and Bryan realize they aren’t the only ones in the Alphabet House feigning madness.

This book was an interesting, but tough, read as it shone the light on practices during World War II that I knew very little about. It was worth at least three stars. Here is my review:

This is a difficult book to review. I am glad that I read it, but cannot use the word “enjoyed” because of the subject matter. The first half was exciting in parts and also particularly horrific with the account of the hospital and what went on in there. The second half was more of a conventional thriller, but was far too long and extremely violent. I think that it was worth reading, although it could have been better edited. 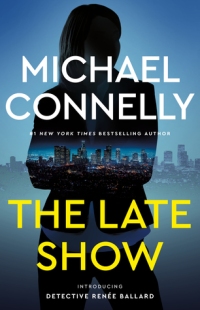 The Late Show by Michael Connelly

My third book, which I only finished a few minutes ago was The Late Show by Michael Connelly, part 1 in his Renée Ballard series. The blurb follows:

Renée Ballard works the night shift in Hollywood, beginning many investigations but finishing none as each morning she turns her cases over to day shift detectives. A once up-and-coming detective, she’s been given this beat as punishment after filing a sexual harassment complaint against a supervisor.

But one night she catches two cases she doesn’t want to part with: the brutal beating of a prostitute left for dead in a parking lot and the killing of a young woman in a nightclub shooting. Ballard is determined not to give up at dawn. Against orders and her own partner’s wishes, she works both cases by day while maintaining her shift by night. As the cases entwine they pull her closer to her own demons and the reason she won’t give up her job no matter what the department throws at her.

This the three star review that I have just written:

A solid Connelly book with a new central character, female this time. The plot consists of her working the night shift, as a detective, doing the first part of any investigation but never being able to see it all to the end. She has to deal with the fallout of a nasty event with colleagues in the past as well as the everyday sexism in the police force. Ballard is an interesting character, with an unusual lifestyle. As the book develops, she works through a number of cases from different angles, with one major investigation that involves police corruption.

I enjoyed the book and will continue to read more by the author.

Once I have completed this post I will choose my next book from the pile.