I am very tired after over a week of difficult days for the family, so will have to make this post short but, I hope, sweet-ish!

This week’s Reading Roundup is again about one book, but it was a long one and I feel rather pleased that I managed to read it. Reading is difficult when you have memory problems. Trying to remember the beginning chapters of a book when you have got halfway through… well, I hope you can see what I mean! I am having to read as quickly as I can so that the outline of the plot doesn’t fade away. It’s very frustrating indeed! 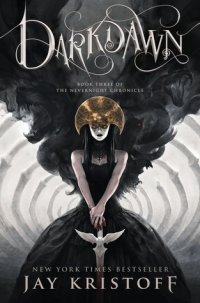 I had been waiting for Darkdawn by Jay Kristoff (#03 of The Nevernight Chronicle) for what felt like ages. Finally it became available from the library’s ebook service and I have just finished it this morning. Here is the blurb:

A ruthless young assassin’s journey for revenge comes to a stunning end in the conclusion of this acclaimed epic fantasy trilogy.

The Republic of Itreya is in chaos. Mia Corvere has assassinated Cardinal Duomo and rumors of Consul Scaeva’s death ripple through the street of Godsgrave like wildfire. But buried beneath those same streets, deep in the ancient city’s bones, lies a secret that will change the Republic forever.

Mia and her brother Jonnen must journey through the depths of the ancient metropolis. Their quest will take them through the Godsgrave underdark, across the Sea of Swords, back to the library of the Quiet Mountain and the poisoned blades of Mia’s old mentors, and at last the fabled Crown of the Moon. There, Mia will at last discover the origins of the darkin, and learn the destiny that lies in store for her and her world. But with the three suns now in descent, and Truedark on the horizon, will she survive?

I really loved the first two books in the series, giving them four and five stars respectively. This is what I wrote about Darkdawn:

Darkdawn by Jay Kristoff
My rating: 3 of 5 stars

I read the first two books in the trilogy almost exactly two years ago and absolutely adored them so, when I saw that the third was available, I couldn’t wait to read it. Yes, it was exciting, adventurous, violent, gory, etc., etc., just like the others. Sadly, it was also badly flawed and disappointing.

The other books received very mixed reviews and I ignored the negative ones, but this book deserves fewer accolades. The violence and sheer amount of killing and blood is vastly overdone. Mia loses her heroic status for me and simply becomes a crazed murderous figure. Scene after scene involves so much gratuitous violence that it is very near to boring in the repetitive gore-fest. In fact, monsters are repeated, as are ideas. Worst of all – the library!!!!! Ok, that last comment is an attempt at humour.

A small niggle is the poor editing in places where there were several homophones. As for the sex scenes! One went on for more than three pages and it was just boring and unnecessary.

If this book had been shorter it would have, perhaps, been much better. A tighter and less repetitive (yes, I know I am repeating repetitively) plot might have raised this book up to the level of the others. I love so much of this author’s writing and will look out for his next book as I am sure that he has something much better to give us all.

I am not sure what I am going to read next, but will enjoy browsing through the ebook site.

Until next week: Happy Reading to you all!

Retired School Librarian
View all posts by The Librain →
This entry was posted in Reading and tagged book reviews, books, ebooks, fantasy, Goodreads. Bookmark the permalink.