I have really enjoyed my reading this week, having finished two great books and now being half-way through a third. 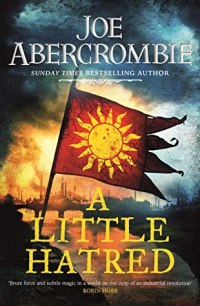 A Little Hatred (The Age of Madness #1) by Joe Abercrombie

The first book was A Little Hatred (The Age of Madness #1) by Joe Abercrombie. Here is the blurb:

The chimneys of industry rise over Adua and the world seethes with new opportunities. But old scores run deep as ever.

On the blood-soaked borders of Angland, Leo dan Brock struggles to win fame on the battlefield, and defeat the marauding armies of Stour Nightfall. He hopes for help from the crown. But King Jezal’s son, the feckless Prince Orso, is a man who specializes in disappointments.

Savine dan Glokta – socialite, investor, and daughter of the most feared man in the Union – plans to claw her way to the top of the slag-heap of society by any means necessary. But the slums boil over with a rage that all the money in the world cannot control.

The age of the machine dawns, but the age of magic refuses to die. With the help of the mad hillwoman Isern-i-Phail, Rikke struggles to control the blessing, or the curse, of the Long Eye. Glimpsing the future is one thing, but with the guiding hand of the First of the Magi still pulling the strings, changing it will be quite another…

And this is my quick review on Goodreads:

A Little Hatred by Joe Abercrombie
My rating: 4 of 5 stars

I really love Joe Abercrombie’s writing and have read all of his books so far, I think! So, I was chuffed to bits when I saw this one. It is quite a long time since I last read one of his books and I have had a mild stroke in between. This meant that I struggled at the beginning of this one. First of all, I couldn’t remember much about the previous books. A few names, perhaps, but very little of the plots. Secondly, I couldn’t keep all of the new characters and their plot lines clear in my mind. Maybe some guiding at the beginning of each chapter would have helped?

Luckily, as the book moved on, the power of the writing, the vivid characters and the dark humour gripped me as usual and things became much clearer. I really enjoyed the whole riotous tale and cannot wait to read more!

I suppose that the stroke has given me a fantastic reason for reading all of Joe’s books again! What a treat 😄!

Ooh, I think there is another book available in the series, so I will go and investigate after finishing this post…

My second read of the week was a return to a favourite series: Perfect Kill (D.I. Callanach #06) by Helen Fields. This is the book’s blurb:

Alone, trapped in the darkness and with no way out, Bart Campbell knows that his chances of being found alive are slim.

Drugged and kidnapped, the realisation soon dawns that he’s been locked inside a shipping container far from his Edinburgh home. But what Bart doesn’t yet know is that he’s now heading for France where his unspeakable fate is already sealed…

DCI Ava Turner and DI Luc Callanach are working on separate cases that soon collide as it becomes clear that the men and women being shipped to France are being traded for women trafficked into Scotland.

With so many lives at stake, they face an impossible task – but there’s no option of failure when Bart and so many others will soon be dead…

And this is my verdict:

Perfect Kill by Helen Sarah Fields
My rating: 4 of 5 stars

A great series and a really great read! I have enjoyed the five books before this one and found the sixth equally absorbing and entertaining. There is a really good balance between the writing about the personal lives of the main characters and the crimes they are investigating.

The author certainly enjoyed writing her rather graphic accounts of those crimes – at times they almost became too much for me, despite my strong stomach. The whole book was exciting and inventive and I hope that it isn’t the last in the series. I think these characters could carry on for a long time yet!

I had a browse around the public library ebook catalogue for the next book and chose a book by a new-to-me author. My verdict will be revealed next week…

Until then: Happy Reading to you all!