This week I read the final book in a trilogy and started reading something interesting which led me to a decision. 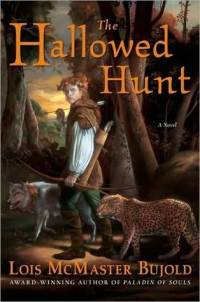 I had finished the first two book in Lois McMaster Bujold’s World of the Five Gods series, which fully deserved five stars on the Goodreads website. Then I turned to the final book, The Hallowed Hunt. This is the blurb:

The half-mad Prince Boleso has been slain by a noblewoman he had intended to defile — and Lord Ingrey kin Wolfcliff must transport the body to its burial place and the accused killer, the Lady Ijada, to judgment. With the death of the old Hallow King imminent and the crown in play, the road they must travel together is a dangerous one. And though he is duty-bound to deliver his prisoner to an almost certain death, Ijada may be the only one Ingrey dares trust. For a monstrous malevolence holds the haunted lord in its sway — and a great and terrible destiny has been bestowed upon him by the gods, the damned, and the dead.

This is the review I wrote on Goodreads:

The Hallowed Hunt by Lois McMaster Bujold
My rating: 4 of 5 stars

Let me say, first of all, that I enjoyed the book and thought it deserved four stars. Yes, for me, it was not quite as good as the other two in the series, but Bujold’s “not quite as good” is still way better than many other authors’ “fantastic!”

This book was a surprise, as the third volume in a trilogy, in that the story takes place much earlier in the series’ timeline. None of the familiar “landscape” or characters are there. So the reader has to begin again in imagining the immediate setting.

To be honest, I found the first part of the book quite difficult to follow. Now, that could have been because of the effects of my stroke, rather than any fault of the author. Once the main characters became clearer, I began to settle in to the story and Bujold’s writing carried me along to the end.

So, my verdict is that the book is well-worth reading and I will most certainly be stockpiling Bujold’s other books to enjoy at a later date. What a treat is in store for me!

Tamed: Ten Species That Changed Our World by Alice Roberts

Younger Son sent me several ebooks for Mothers’ Day, back in March. He always chooses such interesting ones which introduce me to new ideas (well, new to me!). I decided that my next read would be one of these: Tamed: Ten Species That Changed Our World by Alice Roberts. As I have not read a non-fiction book of this type for many years, I am finding that the amount of concentration that I need to read it is difficult to sustain for long periods. So, I have come up with the plan that I will read the book in chunks, with easier books in between. Obviously, my memory issues could cause problems, but each chapter is reasonably complete in itself, so I will see how it goes. If the plan does not work, I will change things around.

I will let you know next week if this idea is working! Until then:

Retired School Librarian
View all posts by The Librain →
This entry was posted in Reading and tagged book reviews, books, ebooks, fantasy, Goodreads. Bookmark the permalink.