Well, here is my final Reading Roundup for this month. I have two books to tell you about this week. 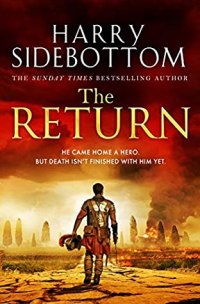 The Return by Harry Sidebottom

My first read was The Return by Harry Sidebottom. Let’s look at the blurb before my review:

He came home a hero.
But death isn’t finished with him yet . . .

145BC – CALABRIA, ANCIENT ROME. After years of spilling blood for Rome, Gaius Furius Paullus has returned home to spend his remaining days working quietly on the family farm.

But it seems death has stalked Paullus from the battlefield. Just days after his arrival, bodies start appearing – murdered and mutilated. And as the deaths stack up, and panic spreads, the war hero becomes the prime suspect. After all, Paullus has killed countless enemies on the battlefield – could he have brought his habit home with him?

With the psychological effects of combat clouding every thought, Paullus must use all his soldier’s instincts to hunt the real killer. Because if they are not brought to justice soon, he may become the next victim.

And this is my verdict:

The Return by Harry Sidebottom
My rating: 2 of 5 stars

I have tried to read a book by this author before, but gave up because I found it flat. As a former student of all things Ancient Rome, I had thought that I would give his books another try and I did finish this one, but wonder why!

In The Return, Sidebottom tries to combine his love of the Ancient Roman military with a mystery story. Whereas he obviously revels in the scenes of army life and deeds, the “whodunnit” side is badly written. His hero is a poor investigator and there is very little actual mystery as it is so obvious who the perpetrators are. They might as well wear signs saying “Wedunnit!”. The tale wanders about, trying to build some tension, but instead goes down various side roads full of plot holes.

And, finally, what can I say about the female characters?!? At least there are some, but they are either stereotyped harridans or younger sketchily written ornaments. There were strong women around in the Roman Republic! 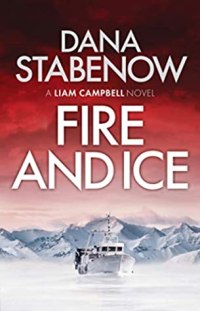 Fire and Ice by Dana Stabenow

My second read was written by an author who I wrote about a few weeks ago: Dana Stabenow. This time, I turned to her other series set in Alaska to read the first book: Fire and Ice (Liam Campbell #01). This is the blurb:

Newenham, Alaska, is a long way from the big-city comforts of Anchorage, where Sergeant Liam Campbell was an up-and-coming state trooper with everything going his way. But that was before his life unraveled. Transferred in disgrace to this rough-and-tumble fishing town on the shores of Bristol Bay, Liam knows Newenham is the end of the line. It’s also his last shot at getting his life back.. He’s about to come in for a very rough landing. Stepping onto the airstrip at Newenham, Liam walks into a crime scene: a body torn apart by the propeller of a Piper Super Cub. As if that isn’t enough of a welcome, the woman bending over the corpse is Wyanet Chouinard, the only woman Liam ever truly loved – and soon to be his prime suspect. Next, a man is held hostage in the town’s only decent burger joint–held for shooting out a jukebox that was playing Jimmy Buffet’s Margaritaville. And Liam still doesn’t have his uniform on.

I wrote this quick review on Goodreads:

Fire And Ice by Dana Stabenow
My rating: 3 of 5 stars

I enjoyed this book, as the first part of a series. Whereas I found the first Kate Shugak book rather confusing, in this one the various characters were much more clearly written and the back story was easier to follow. There is a terrific scene in the book which had me enthralled: the crowd of boats jostling around shoals of fish with their spotter planes manoeuvring above – this was excellent writing. I am sure that I will continue to read the series.

As this series is available on our library’s ebook service, I may read the second book next, or I might choose something different. I haven’t decided yet!

Happy Reading to you all.