Well, here is the first Reading Roundup of November – I am finding it very difficult to believe that this year is moving so fast! As I am still struggling with poor concentration, plus an addiction to yet another series on Amazon Prime ☺️☺️☺️, I can only tell you about one book this week… 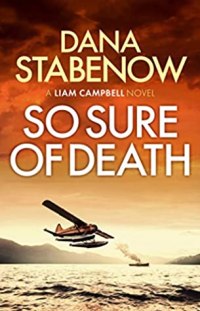 So Sure of Death by Dana Stabenow

This week’s read was So Sure of Death by Dana Stabenow (Liam Campbell #02). Here is the blurb:

Three relatively-quiet months have passed since Trooper Liam Campbell was assigned to the remote post of Newenham. It all changes when a local fishing boat is discovered scuttled and adrift—its crew of seven dead in circumstances that can’t be accidental—and Wy stumbles into a murder scene at an archaeological dig. Cultures collide as the community must deal with too many outside distractions.

Summertime in the Bush smelled like OFF. Well, OFF and salmon. Wy smelled of both, but she smelled most strongly of herself, a scent somewhere between lilac and lemon peel, half sweet, half tart, part seduction, part challenge. Liam strapped himself into the shotgun seat of the Cessna and concentrated on that smell. It was easier than thinking about hanging his ass out over a two-thousand-foot precipice for the next hour.

And this is the short review which I posted on the Goodreads website:

So Sure Of Death by Dana Stabenow
My rating: 4 of 5 stars

I think that this book was better than the first in the series and I really enjoyed it. I like how the back stories of the main characters continued to be fleshed out, giving the reader more insight into their motivations. The personal stories and the well-written descriptions of the amazing land and seascapes of Alaska really make these books. As for the crimes at the centre of the plot – these were written and developed well and remained mysterious enough for me until the end.

I will definitely continue to read the series, just as long as my library service continues to add them to their ebook catalogue!

Nothing Gold Can Stay by Dana Stabenow

I already have the third book in the series lined up (see above), but may take a one book detour instead. My decision will become clear in next week’s post.

Until then… Happy Reading to you all!

Retired School Librarian
View all posts by The Librain →
This entry was posted in Reading and tagged book reviews, books, ebooks, Goodreads, mystery. Bookmark the permalink.