I can’t write much today as nothing has really happened! Too poorly to go out again, so I snuggled in yesterday’s outfit and my fluffy blanket trying to solve puzzles in the newspaper and watching recorded TV. We both loved the “No Offence” series on Channel 4 – fantastic scripts and characters. The finale was literally (almost) explosive! I have embedded the video trailer below:

The Marriage Plot by Jeffrey Eugenides

I then went upstairs and started my new book “The Marriage Plot” by Jeffrey Eugenides. But I only managed to get to page 20 before giving up. I simply cannot concentrate on books like this and, these days, I give myself permission to stop. When I was a child, I had a strong idea that I should always finish a book and it took many years for me to put that rule aside. So, instead, I am embarking on Sara Paretsky’s “Brush Back” – I adore her character V.I Warshawski. 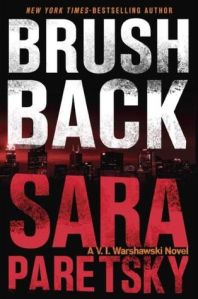 Brush Back by Sara Paretsky

Yesterday, I actually finished “The Silent Wife”, which I had started ages ago and put on hold for a while after getting about 3/4 of the way through. I read the last quarter really quickly and, generally, enjoyed the book. The characters were pretty unlikeable, but they were meant to be so, I think. The plot was also a clear lesson for women who don’t protect themselves sufficiently in relationships.

The Silent Wife by ASA Harrison

Anyway, I am really going to try to go out with Lovely Husband tomorrow. We have had such a quiet week because Elder Son has been away in London on his own since last Saturday. Soooo, peaceful but I also miss him a lot and worry about him. He is really amazing because, although he has ASD and learning difficulties, he is able to look after himself when away from us and has memorised the Tube Map so he can navigate around London. Incredible lad!

Retired School Librarian
View all posts by The Librain →
This entry was posted in Family, Lifestyle, Reading and tagged books, TV. Bookmark the permalink.