I have decided to add the blurb to each book review from this week. Hopefully, that will be helpful. I am also pleased that we were able to visit the public library today so that I could pick up two reservations and build up the book pile next to my bed 😄.

Half the World by Joe Abercrombie

My first read was Joe Abercrombie’s Half the World, #2 in his Shattered Sea series, to which I gave the full five stars. Here is the blurb:

Thorn Bathu was born to fight. But when she kills a boy in the training square she finds herself named a murderer.

Fate places her life in the hands of the deep-cunning Father Yarvi as he sets out to cross half the world in search of allies against the ruthless High King. Beside her is Brand, a young warrior who hates to kill. A failure in her eyes and his own, the voyage is his last chance at redemption.

But warriors can be weapons, and weapons are made for one purpose. Will Thorn always be a tool in the hands of the powerful, or can she carve her own path? Is there a place outside of legend for a woman with a blade?

And here is my short review on Goodreads:

I am a massive fan of Joe Abercrombie and just can’t wait to read his books when I find them. In fact, I have just reserved the final book in this trilogy at the library. I loved this book. The characters were great and a nice switching around of stereotypes. The plot was gripping, with loads of unexpected turns. Not as gruesome and violent as his adult books; this series is supposed to be YA. Highly recommended to all lovers of fantasy with strong female, and male, characters.

I adore Abercrombie’s books and hope that he continues to write exciting fantasy fiction to this standard for a very long time. 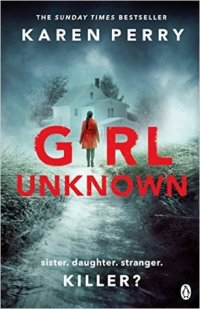 My next read was Girl Unknown by Karen Perry. I awarded this book four stars on Goodreads. The blurb is as follows:

When first-year student Zoë Barry walks into Professor David Connolly’s office and tentatively says these words, he is left reeling. But it is the lives of his family – particularly his wife Caroline – which are turned upside down by the arrival of this stranger.

Though no one knows quite who Zoë is, she is soon entangled in their lives. Yet her stories don’t ring true and Caroline is determined to learn if the girl is the unlucky innocent she claims to be or someone with a far darker agenda.

A deadly cuckoo in the nest . . .Because by letting Zoë in, David and Caroline aren’t just leaving themselves vulnerable. They’re risking the most precious thing in the world – the lives of their children . . .

And here is what I wrote in my review:

An excellent psychological thriller that had me gripped all the way through. Told through two people’s points of view, it had surprises at every turn. All kinds of back stories unfolded during the novel, shedding a different light on the characters’ actions in the past. A tale of a fractured marriage being out under intolerable strain. Great read!

The Killing Game by J A Kerley

I must have been lucky this week, or very discerning when I chose these books at the local library, as my next read also deserved four stars. My third book was The Killing Game by Jack Kerley and this was the blurb:

Detective Carson Ryder’s reputation is on the line when a sociopathic serial killer embarks on a personal vendetta, constructing his crimes to hit Carson’s weak spot.

He’s coming to get you…

After a humiliating encounter with a cop, Romanian immigrant Gregory Nieves launches a vendetta against the Mobile Police Department, Alabama. Nieves can’t fight a department, so he selects one man who symbolizes all men in blue: Carson Ryder, the MPD’s specialist in bizarre and twisted crimes.

Carson has never seen a killing spree like this one: Nothing connects the victims, the murder weapon is always different, and the horrific crime scenes are devoid of evidence. It almost seems he’s being taunted. Even laughed at.

Carson doesn’t know it yet, but he is caught up in a sadistic game of life and death. And there can only be one victor…

Yet again, I had jumped in part way through a series: this book is #9 in Kerley’s Carson Ryder series. It was a good read, however, and I am now keen to try some more. Here is my Goodreads review:

Very good murder mystery. Part of a series I have never read before. I liked the main characters on the police side. It was interesting to get inside the mind of the criminal! Great twists in the story too. I will definitely be searching for more books by this author. 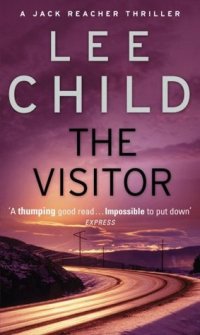 The Visitor by Lee Child

Yet another book in Lee Child’s Jack Reacher series popped into my BorrowBox account today, so that will be my next read. I will write my usual quick review on Goodreads as soon as I finish it.

Happy Reading to you all.