Illness has hit hard today, so I have been unable to go out – hence no proper Outfit of the Day post.  We did go out yesterday, though, visiting the library and also the supermarket cafe where Elder Son works. I do love seeing him there, in his uniform, bustling around and getting on so well in his job. He has now been there for almost two years.

If I had managed to get out of bed today, I had planned to wear another of my Hermès Autumn/Winter scarves: Daimyo Princes du Soleil Levant. This scarf is such a beautiful green, with a lot of gold and silver, and touches of navy and pink. I recently bought some earrings to go with the ginkgo leaf motif on the scarf. So I quickly tried them on this afternoon, with the scarf, in order to take a photo to show readers. There are some very expensive earrings available, but I couldn’t afford to spend too much so got these on Etsy, from MissyTRocks: 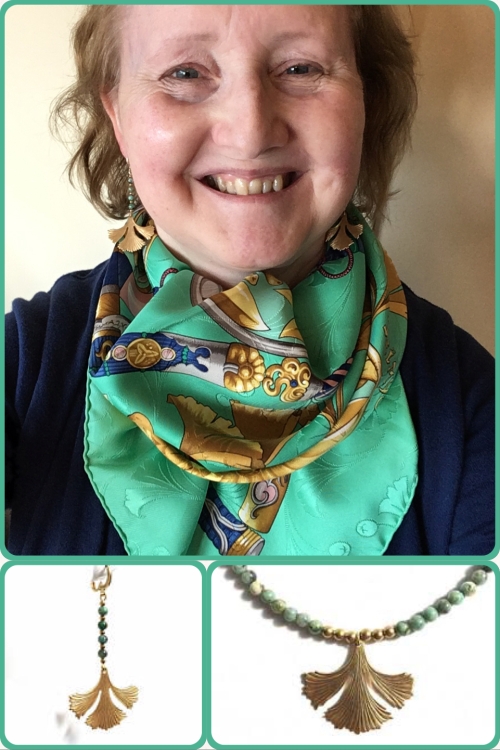 The same Etsy shop also sells a matching necklace, with turquoise and brass beads, as shown in the collage above. There are also loads of pretty leaf shaped earrings available from sellers on Etsy and other sites.

Whilst we were out yesterday the Royal Mail attempted to deliver the parcel I have been waiting for from eBay. So we got home to find a note from them saying that we have to go and pick it up. It just amazes me – we take in loads of parcels for other people on this street, but no-one did it for us! Anyway, I hope we can collect it tomorrow so that I can do a quick reveal of the contents 😉.