I has been a fortnight since I last wrote one of these posts, so I have quite a few books to talk about and I will get on with that straight away.

The Promise by Robert Crais

I was just finishing Robert Crais’ The Promise in the last Reading Roundup and here is the blurb:

Loyalty, commitment, and the fight for justice have always driven Elvis Cole and Joe Pike. If they make a promise, they keep it. Even if it could get them killed.

When Elvis Cole is secretly hired to find a grief-stricken mother, he’s led to an ordinary house on a rainy night in Echo Park. Only the house isn’t ordinary, and the people hiding inside are a desperate fugitive and a murderous criminal with his own dangerous secrets.

As helicopters swirl overhead, Scott and Maggie track the fugitive to this same house, coming face-to-face with Mr. Rollins, a killer who leaves behind a brutally murdered body and enough explosives to destroy the neighborhood. Scott is now the only person who can identify him, but Mr. Rollins has a rule: Never leave a witness alive.

For all of them, the night is only beginning.

Sworn to secrecy by his client, Elvis finds himself targeted by the police even as Mr. Rollins targets Maggie and Scott. As Mr. Rollins closes in for the kill, Elvis and Joe join forces with Scott and Maggie to follow a trail of lies where no one is who they claim — and the very woman they promised to save might get them all killed.

Crais has several series on the go at once and often likes to have his characters “meet” up. I gave this book three stars and wrote the following review on Goodreads:

An enjoyable read with characters who are familiar from a range of series. At times it became rather confusing as Crais writes some chapters in the first person and others in the third, swapping around between different points of view. The plot was interesting and gripping enough to keep my attention so that I finished the book very quickly.

I am not at all a dog lover, but I did enjoy reading about Maggie the police dog!

I had run out of library books by this time, so my next read was an ebook borrowed from the Library’s digital service: Hush Little Baby by Joanna Barnard.

When baby Oliver breaks his arm, no-one can (or will) say how it happened.

His mother is exhausted.

His father is angry.

His older sister is resentful.

And they all have something to hide…

This was very quick to read and here are my thoughts for three stars:

More of a psychological thriller really. I read this very fast in just a few hours. The book is very unsettling for a parent and I now feel very uncomfortable having just finished it. My problem with the book is that I simply couldn’t like any of the characters and somehow too many strands had been squeezed into the plot. There are a number of twists to keep the reader’s interest although I did have a pretty clear idea how it would end.

My next visit to the Library resulted in my choosing this book for my reading pile: Viper Game by Christine Feehan.

GhostWalker Wyatt Fontenot knows the price he paid for the secret military experiments that gave him his special catlike abilities. After all, he left his bayou home a healer and came back a killer. While Wyatt and his GhostWalker brother Gator may have known exactly the sort of game they were getting into, Wyatt never anticipated where it would lead—or to whom.

The swamps hold many mysteries, but few are as sinuously seductive as Le Poivre de Cayenne. The woman the locals call Pepper is every bit as enigmatic as the three little girls she’s desperately trying to protect. From what, Wyatt is soon to discover. Right now Pepper needs a man like Wyatt. Passionately. But her secrets are about to take them both deeper into the bayou than either imagined—where desire is the deadliest poison of all.

This was my very quick response:

Gave up on this after a couple of chapters. I think you need to have read previous books in the series to understand what is going on!

This was a big mistake on my part! To try to step into a series for the first time at #11 was rather daft and it simply did not work.

My next choice was far more successful and I have already reserved more books by this author – Rory Clements’ Corpus. The blurb is long, but really sets the scene:

1936.
Europe is in turmoil.
The Nazis have marched into the Rhineland.
In Russia, Stalin has unleashed his Great Terror.
Spain has erupted in civil war.

In Berlin, a young Englishwoman evades the Gestapo to deliver vital papers to a Jewish scientist. Within weeks, she is found dead in her Cambridge bedroom, a silver syringe clutched in her fingers.

In a London club, three senior members of the British establishment light the touch paper on a conspiracy that will threaten the very heart of government. Even the ancient colleges of Cambridge are not immune to political division. Dons and students must choose a side: right or left, where do you stand?

When a renowned member of the county set and his wife are found horribly murdered, a maverick history professor finds himself dragged into a world of espionage which, until now, he has only read about in books. But the deeper Thomas Wilde delves, the more he wonders whether the murders are linked to the death of the girl with the silver syringe – and, just as worryingly, to the scandal surrounding King Edward VIII and his mistress Wallis Simpson…

This was much more of a meaty read than my usual thriller choices and I gave the book four stars:

An excellent historical thriller set in the 1930s. Highly political, many of the characters are right wing fascists and others are sympathetic to Communism, or are they? I really enjoyed this book and took my time reading it as it was so interesting and well written. I will definitely read more in this series and really recommend this book to anyone who loves intrigue, spies, betrayal and is interested in the period just before WWII. I only have a vague knowledge of this period and so enjoyed finding out more background information as I read the book.

Hunting the Eagles by Ben Kane

I only finished my last book of this roundup last night and am waiting for the final book of the trilogy to be returned to the Library – Ben Kane’s Hunting the Eagles #2 in his Eagles of Rome series.

AD 14: Five long years have passed since the annihilation of three legions in the wilds of Germania. Although the bones of 15,000 soldiers now moulder in the Teutoburg Forest, not all the Romans were slain in the bloody ambush.

A CENTURION OUT FOR VENGEANCE

Demoted, battle-scarred and hell-bent on revenge, Centurion Tullus and his legionaries begin their fightback. Ranged against them is the charismatic chieftan Arminius, who is gathering thousands of hostile tribesmen, and determined to crush the Romans for a second time.

The eagle belonging to Tullus’ old legion is still in enemy hands, but as the Romans’ reprisals take their army deep into German tribal lands, he remains convinced that it is within reach. But Arminius and his warriors are perilously close. As battle begins, Tullus and his comrades know they must fight as never before – just to stay alive…

And here is my review on Goodreads:

Another exciting episode in the series and a very good read. I, fortunately, have no experience of warfare, but the writer really makes the reader feel part of the Roman army as the soldiers trudge through the mud, blood and bodies of their enemies, struggling with the weight of their equipment and with total exhaustion. As a feminist, I found it rather difficult to read some of the remarks about women, rape and prostitution, but I suppose that Kane gets the tone right for men in this situation, even though I heartily dislike it. So I kind of skim over those parts and read on to the gritty sections of the story. I already have part three on order from the Library!

So I awarded the book four stars, with some reservations. 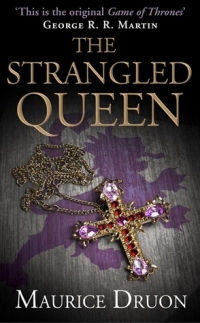 The Strangled Queen by Maurice Druon

These are all of the books I have read (or decided not to finish as in the case of Viper Game) in the last two weeks. When I have finished writing this post, I will start my next read: The Strangled Queen by Maurice Druon. It looks really interesting and I will let you all know if it is next time.

Best wishes and enjoy your reading,

Retired School Librarian
View all posts by The Librain →
This entry was posted in Libraries, Reading and tagged book reviews, books, ebooks, Goodreads. Bookmark the permalink.