I have watched a lot of TV this week but also finished two books. One was really gripping, the other somewhat disappointing.

The Calling by Alison Bruce

The first book was Alison Bruce’s The Calling, #03 in her D.C. Gary Goodhew Mustery series. Here is the blurb:

Kaye Whiting went to buy a birthday present and didn’t come back. She isn’t dead, or physically injured. But she is alone and very, very scared.

Fifty miles away in Cambridge town centre a deeply disturbed young woman is standing by a payphone. She knows she often feels compelled to do harmful things and is driven by a desire to make a call.

DC Gary Goodhew is one of the detectives assigned to find Kaye and when her body is discovered the only clue to the potential murderer is a woman’s voice on his answerphone saying, “Kaye  isn’t the first and won’t be the last!”

This was the third book I had read in the series, but I think I am now going to take a break from it. The reason for the decision will become clear when you read my review as written on Goodreads:

The Calling by Alison Bruce
My rating: 2 of 5 stars

I enjoyed the first two books in the series, but found that this one was not up to scratch. Then, I read that The Calling was actually written before the others!

Anyway, the book had exciting and gripping moments but also a lot of flaws. The sheer number of female characters was confusing (and this was not a result of my memory issues as other reviewers have said the same thing). Some parts of the book were unnecessarily explicit. Also the story arc was muddled in places with scenes which could have easily been cut because they added nothing to the plot.

I will now take a break from the series, but may return to later books another time 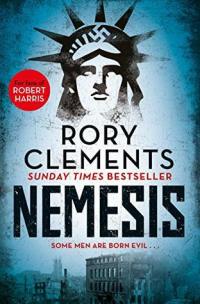 My second book of the week was Nemesis by Rory Clements, #03 in his Tom Wilde series. With my poor memory, I had totally forgotten that I had already read the first two books in the series a few years ago – Corpus (Reading roundup 15/11/17) and Nucleus (Reading roundup 10/10/18). Anyway, here is the blurb:

A race against time to unmask a Nazi spy

In a great English house, a young woman offers herself to one of the most powerful and influential figures in the land – but this is no ordinary seduction. She plans to ensure his death . . .

On holiday in France, Professor Tom Wilde discovers his brilliant student Marcus Marfield, who disappeared two years earlier to join the International Brigades in Spain, in the Le Vernet concentration camp in the foothills of the Pyrenees. Wilde secures his release just as German tanks roll into Poland.

Meanwhile, a U-boat sinks the liner Athenia in the Atlantic with many casualties, including Americans, onboard. Goebbels claims Churchill put a bomb in the ship to blame Germany and to lure America into the war.

As the various strands of an international conspiracy begin to unwind, Tom Wilde will find himself in great personal danger. For just who is Marcus Marfield? And where does his loyalty lie?

This book was so enjoyable, as you can see from my review on Goodreads:

Nemesis by Rory Clements
My rating: 4 of 5 stars

I have read all three books in this superb series and can honestly say that they get better and better. The author has so clearly meticulously researched the background to the period (the 1930s leading up to the beginning of WWII), but uses this information in a seamless way. I feel that I learn from these books, but the author is not at all didactic. The main characters are interesting, different and intriguing. The plot is exciting and subtle with many twists.

I really hope that this series continues as I would love to see how Clements uses the events of WWII with his main characters. I am such a fan of his writing that I have another book of his lined up. I cannot wait to read it!

I am not sure what I am going to read next. Maybe one of the non-fiction ebooks younger son sent me for Mother’s Day? I will make up my mind later.