This was a much more successful week in terms of reading. My life feels as if it is on a seesaw these days: if I am reading a lot it is because I am spending more time ill in bed; if  I am feeling well enough to get up, then I don’t make as much time to read. I suppose it is a case of clouds and silver linings! 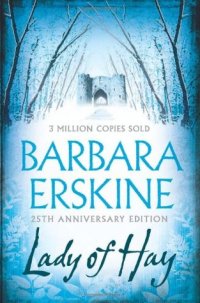 Lady of Hay by Barbara Erskine

I was struggling with the huge book Lady of Hay by Barbara Erskine at the end of last week. I did manage to finish it in the end, but it was a bit of a slog. Here is the blurb:

In London, journalist Jo Clifford plans to debunk the belief in past-lives in a hard-hitting magazine piece. But her scepticism is shaken when a hypnotist forces her to relive the experiences of Matilda, Lady of Hay, a noblewoman during the reign of King John.

She learns of Matilda’s unhappy marriage, her love for the handsome Richard de Clare, and the brutal death threats handed out by King John, before it becomes clear that Jo’s past and present are inevitably entwined. She realises that eight hundred years on, Matilda’s story of secret passion and unspeakable treachery is about to repeat itself.

I had read another book by Erskine many years ago, but I couldn’t remember much about it. Lady of Hay has become a classic over the thirty years plus since it was first published. This is what I wrote in my three star review:

I am not really sure why I persevered right to the end of this very long book. I have read a book by Erskine before, many years ago, and had seen that this one is widely regarded as a classic of historical novels. So, I thought that I should give it a go. However, although I enjoyed the historical parts of the story, the sections from the “present” were awful. Set at the time of writing, the 1980s, I simply didn’t recognise the time that I lived through. These characters were almost all unpleasant with what seemed like an unhealthy obsession with alcohol or coffee, but mainly alcohol, at all times of the day, and night. It appears that just about all of them could hypnotise each other with barely a moment’s notice! As to the violence between people who were supposed to care for each other, the lack of any boundaries. Well, let’s just say that the book has dated very badly indeed.

I was so very disappointed with this book and it seems that many other reviewers on Goodreads feel the same!

My next book was a welcome return to science fiction and deserved at least four stars. I have already requested some of the sequels in the series from the library, so you can see how positive I feel about Leviathan Wakes by James S A Corey. This is the blurb:

Humanity has colonized the solar system – Mars, the Moon, the Asteroid Belt and beyond – but the stars are still out of our reach.

Jim Holden is XO of an ice miner making runs from the rings of Saturn to the mining stations of the Belt. When he and his crew stumble upon a derelict ship, the Scopuli, they find themselves in possession of a secret they never wanted. A secret that someone is willing to kill for – and kill on a scale unfathomable to Jim and his crew. War is brewing in the system unless he can find out who left the ship and why.

Detective Miller is looking for a girl. One girl in a system of billions, but her parents have money and money talks. When the trail leads him to the Scopuli and rebel sympathizer Holden, he realizes that this girl may be the key to everything.

Holden and Miller must thread the needle between the Earth government, the Outer Planet revolutionaries, and secretive corporations – and the odds are against them. But out in the Belt, the rules are different, and one small ship can change the fate of the universe.

This was my response:

What a great book! I have already put in a request at the library for the next one in the series. I loved the detail of the world building here: the languages, the way that people in the Belt lived and thought. The book was such a rollercoaster ride with the switching points of view and the sudden changes and surprises. I picked it up thinking that it might be a slog. I was totally wrong. Exciting, gripping and highly recommended.

The series itself is called The Expanse and the author name James S A Corey is a pseudonym for two people: Daniel Abraham and Ty Franck. I am sure that I will really enjoy reading more books set in this world.

The Seagull by Ann Cleeves

Funnily enough, we had been watching the Vera TV series in the morning and then I saw that the latest in the book series, The Seagull, was available on our library’s ebook catalogue. Visitors to this site will know by now that I am a huge fan of Ann Cleeves’ Shetland and Vera Stanhope series and will read anything I have missed from those. Anyway, here is the blurb for The Seagull:

A visit to her local prison brings DI Vera Stanhope face to face with an old enemy: former detective superintendent, and now inmate, John Brace. Brace was convicted of corruption and involvement in the death of a gamekeeper – and Vera played a key part in his downfall.

Now, Brace promises Vera information about the disappearance of Robbie Marshall, a notorious wheeler-dealer who disappeared in the mid-nineties, if she will look out for his daughter and grandchildren. He tells her that Marshall is dead, and that his body is buried close to St Mary’s Island in Whitley Bay. However, when a search team investigates, officers find not one skeleton, but two.

This cold case case takes Vera back in time, and very close to home, as Brace and Marshall, along with a mysterious stranger known only as ‘the Prof’, were close friends of Hector, her father. Together, they were the ‘Gang of Four’, regulars at a glamorous nightclub called The Seagull. Hector had been one of the last people to see Marshall alive. As the past begins to collide dangerously with the present, Vera confronts her prejudices and unwanted memories to dig out the truth . . .

And here is my four star review:

I read this all in one go on a cold Sunday and it was worth every minute spent on it. I love the character of Vera Stanhope, but I can’t decide whether that is because of the books or because of how Brenda Blethyn plays her in the TV series. Anyway, this was another great read in the series and I enjoyed that we found out more about Vera’s father, Hector. The interplay between the members of Vera’s team is also getting more interesting as the series continues. And long may it do just that! 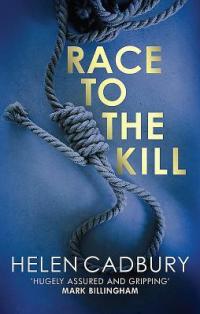 Race to the Kill by Helen Cadbury

My last book this week was another ebook: Race to the Kill by Helen Cadbury. This is the blurb:

It is the middle of a long night shift for PC Sean Denton and his partner PC Gavin Wentworth when they are approached by a dishevelled-looking woman desperate that they follow her. She leads them to the old Chasebridge High School where they find the dead body of a Syrian refugee. The investigation which points to the neighbouring greyhound stadium finds Denton caught up in a world of immigration, drugs and sexual abuse, and one in which his private life becomes increasingly entwined.

I gave this this one a three star review, although I did enjoy it:

I enjoyed the characters and the setting and at least, for once, the plot did not involve a horrible gory murder of a female victim. Different story arcs were woven together well and the police procedures seemed to be well written. On the other hand, I simply wasn’t gripped by this book and kept drifting away from it and doing something else. Good enough, but could have been better. Sorry to see that the author died in 2017, she had a lot of promise.

If I ever come across the other two books in the series, this was the third, I am sure that I will read them.

Now, I am going to have a look through the ebook service to choose my next read as I don’t have the strength to visit the library yet.

Happy Reading to you all,