I read three books this week and have started a fourth. After all the excitement of the last few weeks, with highly enjoyable books, only one of the three was really engaging. 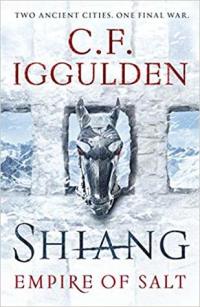 My first book was Shiang by C F Iggulden (Conn Iggulden), #02 in his Empire of Salt series. Here is the blurb:

IF THESE STONES COULD SPEAK . . . THEY WOULD CALL FOR WAR.

In Shiang, the young king rules without dissent. Mazer swordsmen stand watch on every corner, looking for the first sign of rebellion. This city is a place of quiet and slow dignity, like a man eating rice with a razor pressed against his throat.

Yet with one sharp movement, order is overturned. The balance of centuries is undone in the sudden spill of blood – and in the darkness, something terrible returns to Shiang.

Far to the west, four Shiang masters approach the city walls of Darien. The sword saint and his companions have crossed a continent to bring an old man home for punishment. They will not be denied, even if the whole city stands in their way.

And this is the three star review that I wrote in Goodreads:

I read the first part, Darien, some time ago so I found it quite difficult to remember characters and events when reading this. It was particularly disorientating because this book began in a different setting and I felt very confused until the story got going. I really didn’t feel that either book were up to Iggulden’s usual standard. His writing is good, but he doesn’t do enough to build a fantasy world. There was also the odd mention of Rome that was rather jarring. Was this a hint of something to be told in a later book?

I think that this series is actually intended to be a trilogy, so I will almost certainly read the final part, when it is published. Generally speaking, I believe that Iggulden is a much better writer of historical fiction, which I really enjoy. 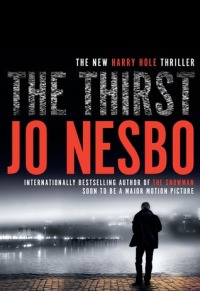 The Thirst by Jo Nesbo

My second book of the week was great: #11 in the Harry Hole series: The Thirst by Jo Nesbo. This is the (not very expansive) blurb:

In Police—the last novel featuring Jo Nesbø’s hard-bitten, maverick Oslo detective—a killer wreaking revenge on the police had Harry Hole fighting for the safety of the people closest to him. Now, in The Thirst, the story continues as Harry is inextricably drawn back into the Oslo police force. A serial murderer has begun targeting Tinder daters—a murderer whose MO reignites Harry’s hunt for a nemesis of his past.

I gave this four stars and wrote the following review:

I have read quite a few of the Harry Hole books and think that this is one of the best. This book is so cleverly crafted – I particularly enjoyed the beginning. Nesbo is playing with his readers!

I don’t think that the series necessarily needs to be read in order, well I haven’t, but it does help to give quite a lot of background and context if you have read a few. To see Harry happy is pretty amazing and certainly unusual. I am now requesting all of the other books in the series to fill in the gaps, or Holes – ouch!

OK, I couldn’t resist that!

The Staveley Suspect by Rebecca Tope

The third and final book was a complete change of direction into a much more domestic take on a murder mystery: The Staveley Suspect by Rebecca Tope (Persimmon Brown #05). Here is the blurb:

Simmy Brown has a lot on her mind. Not just keeping her florist business afloat, her father’s failing health, the challenge of developing a long-term relationship with Christopher, but also the approach of Mother’s Day, a busy and painful day for her.

But in taking an order for a retirement party in Staveley, she is pulled into her most challenging investigation yet. When a daughter starts accusing her own mother of murder, Simmy, Ben and Bonnie find themselves taking different sides of the investigation. With her relationships under strain, Simmy has to learn to leave her own concerns behind to discover just who the killer is.

I only gave this one two stars on Goodreads – maybe I prefer more high octane reads!

I haven’t read nothing by this author before and I might just try another book from a different series. I enjoyed the setting of this book as I have been to the area quite a few times and actually stayed in Troutbeck as a child. The domestic and personal background to the story was quite interesting at first, but very soon it all overwhelmed the actual mystery that the main characters were trying to solve, so much so that I became bored with all of the shop opening and closing, deliveries and personal issues. The ending was so abrupt that I thought, at first, that there had been a few paragraphs or pages missed out. So, not a very satisfying read.

By the way, this book averages nearly four stars on Goodreads, so please check the other reviews on there if this kind of book appeals to you. Perhaps I am too bloodthirsty!

All of my books this week have been ebooks from our library service’s extensive collection. I always check the digital catalogue first before looking for the print versions because, if the ebook is available, I can download it instantly to my iPad. I need to visit the Library soon, however, as I have now run out of print books! 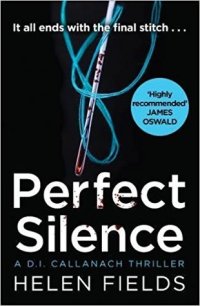 I am currently reading #04 in Helen Fields’ DI Callanach series: Perfect Silence, and I will give you my verdict next time.

Retired School Librarian
View all posts by The Librain →
This entry was posted in Reading and tagged book reviews, books, ebooks, Goodreads. Bookmark the permalink.