I am sitting here ready to write this post with my brain absolutely boggled! Two amazing science fiction books by Adrian Tchaikovsky are the cause. In fact my scrambled mind is giving me all kinds of problems. How on earth do I review these two books?

Please forgive my failings this week and, instead, read the excellent reviews of these books on Goodreads or other sites. 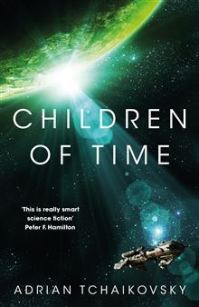 Children of Time by Adrian Tchaikovsky

The first book was Adrian Tchaikovsky’s Children of Time. Apparently, this was originally written as a stand-alone book, then a sequel was published this year. Anyway, here is the blurb:

A race for survival among the stars… Humanity’s last survivors escaped earth’s ruins to find a new home. But when they find it, can their desperation overcome its dangers?

WHO WILL INHERIT THIS NEW EARTH?

The last remnants of the human race left a dying Earth, desperate to find a new home among the stars. Following in the footsteps of their ancestors, they discover the greatest treasure of the past age – a world terraformed and prepared for human life.

But all is not right in this new Eden. In the long years since the planet was abandoned, the work of its architects has borne disastrous fruit. The planet is not waiting for them, pristine and unoccupied. New masters have turned it from a refuge into mankind’s worst nightmare.

Now two civilizations are on a collision course, both testing the boundaries of what they will do to survive. As the fate of humanity hangs in the balance, who are the true heirs of this new Earth?

I simply had to give this book the full five stars. It is an amazing achievement and deserves the accolades and awards. This is my attempt at a review on Goodreads:

Someone told me that this book is definitely not recommended for arachnophobes.

I am an arachnophobe! Terrified of the dratted eight-legged creatures.

Yet, I read the book and am so glad that I did. It must be one of the best science fiction books that I have ever read. The ideas and imagination that have gone into the book are incredible. The writing ability is superb: managing two alternating main plot lines that take place over 1000s of years shows great technical ability. Creating believable characters out of spiders is amazing – unlike another book that I have just read, Tchaikovsky manages to show how the spiders develop, evolve, live and communicate in a very realistic way….. shudder…

The working out of future technology and space travel is also brilliant. The challenges of waking up from “cold sleep” to find out that huge changes have happened since you were last awake is fascinating to think about. In fact the whole book gives the reader so much to contemplate.

My only issues are my own fault. Because I had such poor science teaching at school (none past the age of 14), my knowledge of all of the sciences is very limited. I love reading science fiction and have always been fascinated by the immensely rich ideas generated by so many writers of the genre, but I did struggle with some of the complex science in the book. I have given the book the full five stars because none of the above is due to the author.

I recommend this book highly – it is simply awesome! 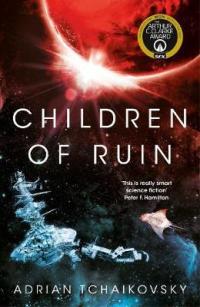 Children of Ruin by Adrian Tchaikovsky

I then went on to read the sequel: Children of Ruin. This, again, is an incredible book and I have only just finished it this afternoon (this is why my poor brain is suffering). This is the blurb:

Thousands of years ago, Earth’s terraforming program took to the stars. On the world they called Nod, scientists discovered alien life – but it was their mission to overwrite it with the memory of Earth. Then humanity’s great empire fell, and the program’s decisions were lost to time.

But those ancient terraformers woke something on Nod better left undisturbed.

And it’s been waiting for them.

I am going to have a think for a few minutes before I try to tackle the review, because this one is even harder to write…

…OK, I’m back again! I gave this book four stars this time as I don’t think that it is quite as brilliant as the first, but there is not much between them. Anyway, this is what I wrote:

This book is so hard to review. Like the previous book, Children of Time, it was thoroughly brilliant but, was not quite so exceptional. It was as if the author was writing most of the same story again, with a few tweaks and different characters. Yet again, the world building was amazing and the use of different timelines was cleverly done.

I found the ideas around humans and other “creatures” trying to communicate really fascinating. Tchaikovsky must really have researched into way certain earth “beings” live or might live in a different habitat and out in space. His imagination seems to be boundless!

My main issue again was that I struggled to keep up with the huge amount of scientific information in this book. This is due to my own lack of knowledge and intelligence, but this did have a small impact on my enjoyment of the book.

I will certainly seek out other books by Tchaikovsky as I am really intrigued to find out what happens when he turns his amazing ideas and imagination onto the fantasy genre!

I will look through my book pile later on and decide what I am going to read next. You will find out if you read next week’s Reading Roundup post!

Happy Reading to you all and very best wishes,

Retired School Librarian
View all posts by The Librain →
This entry was posted in Reading and tagged book reviews, books, Goodreads, science fiction. Bookmark the permalink.