I have read two books this week, started a third and have eight in my library pile. Some of the latter are reservations of books by favourite authors. Oh, libraries are so great! 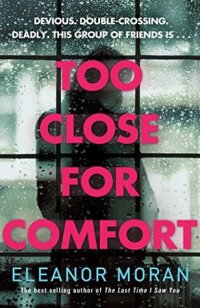 Too Close for Comfort by Eleanor Moran

The first book was Too Close for Comfort by Eleanor Moran. Here is the blurb:

Mia Cosgrove is a high-flying psychotherapist with a thriving practice, but when she receives a desperate phone call from her oldest friend, Lysette, she puts her London life on hold to rush to her side. A friend of Lysette’s, Sarah, has plunged to her death from the top of a multi-storey car park, a text message on her phone next to her, simply saying ‘I’m sorry’ with a single X, left unsent and unaddressed.

At first the police are convinced it’s a suicide, but when another death rocks the rural community Mia is asked to help the ramped-up investigation. Why are the close-knit group of mums who surrounded Sarah so reluctant to share what they knew about their beautiful, troubled friend? And how high a price will Mia pay for her determination to unearth the truth and discover what really happened?

I did enjoy the book, but only gave it three stars rather than four. My review on Goodreads explains why:

I enjoyed the book and read it, more or less, in one go as I wanted to find out whodunnit! The characters were fairly unlikeable with a group of pretty unpleasant women at the centre. The plot was gripping enough for me, although a little confusing in places. I would have given the book four stars, but the author’s constant ominous predictions at the ends of chapters and sections became extremely irritating. This would put me right off reading any of her other books!

I am a bit iffy, as a feminist, about books with female friendship groups where the main dynamic seems to be bitchiness. Mind you, as a realist, I know that these groups do exist usually with a queen bee type managing the members! 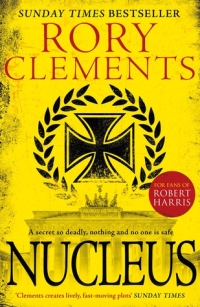 My second read was Nucleus by Rory Clements, #02 in his Tom Wilde series. I have already read the first book in the series, Corpus, back in November 2017, and really enjoyed it. Here is the blurb for Nucleus:

June 1939. England is partying like there is no tomorrow, gas masks at the ready. In Cambridge the May Balls are played out with a frantic intensity – but the good times won’t last… In Europe, the Nazis have invaded Czechoslovakia, and in Germany the persecution of the Jews is now so widespread that desperate Jewish parents send their children to safety in Britain aboard the Kindertransport. Closer to home, the IRA’s S-Plan bombing campaign has resulted in more than 100 terrorist outrages around England.

But perhaps the most far-reaching event of all goes largely unreported: in Germany, Otto Hahn has produced the first man-made fission and an atomic device is now a very real possibility. The Nazis set up the Uranverein group of physicists: its task is to build a superbomb. The German High Command is aware that British and US scientists are working on similar line. Cambridge’s Cavendish Laboratory is where the atom was split in 1932. Might the Cambridge men now win the race for a nuclear bomb? Hitler’s generals need to be sure they know all the Cavendish’s secrets. Only then will it be safe for Germany to wage war.

When one of the Cavendish’s finest brains is murdered, Professor Tom Wilde is once more drawn into an intrigue from which there seems no escape. In a conspiracy that stretches from Cambridge to Berlin and from Washington DC to the west coast of Ireland, he faces deadly forces that threaten the fate of the world.

Well, this second book was great as well. This is my review:

What a great ride this was! I loved the fast pace of the plot, the intrigue, and the fascinating and well drawn characters. Taking place mainly in Cambridge with war looming, we get spies, murder, flirting, daring, bombs and aerial acrobatics. Never mind thrilling motorbike rides! For once in this type of book we also get several interesting female characters too. Highly recommended.

I cannot wait to read read the next book in the series. This would transfer well to TV, I think.

I am about a quarter of the way through Snare by Lilja Siggurdardottir and I will write about this book next week. It is set in Iceland and translated into English and has a very different flavour. Good reading so far.